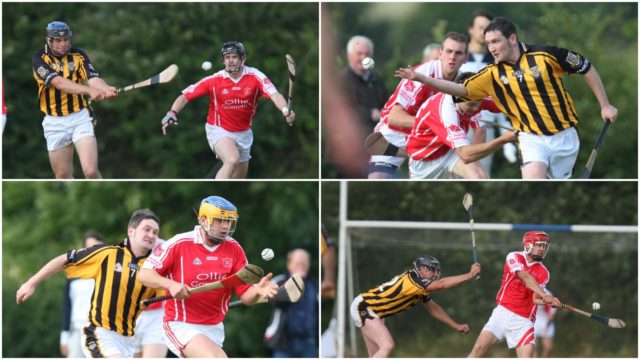 For this week’s Remember the Game, we have decided to feature the current hurling county champions, Camross as we look back on their first-round victory over neighbours Mountrath in 2009.

Of the team that played that day, Joe Phelan is still an active member of the Laois Senior hurling team, while other current seniors involved then were Thomas Dunphy, Tomas Burke, Niall Holmes and Andrew Collier.

Camross survived a late barrage from Mountrath and all but secured their place in their quarter-finals.

Camross were on the front foot early and Mountrath needed a last ditch block from James Hyland to deny James Palmer an early goal.

The game’s first score wasn’t far away though, and Andrew Collier swung over a lovely point from 35 yards out to put Camross ahead.

Colin Delaney added another with a super point from the right wing, with Niall Holmes adding a free and Delaney on target once again from over 70 yards out.

Paul Rice got Mountrath’s only score of the half soon after, as the wing back made his way inside the Camross half and fired over from distance. It was to be a mixed half for Rice, with worse to come for him later on.

Camross continued to pull away with four points on the trot, three of them coming from Niall Holmes and one from Joe Phelan.

The job got even tougher for Mountrath after that when Paul Rice was shown a straight red card for a foul on Colin Delaney.

Mountrath tried to re-jig their team, but Camross just kept pulling away. Two more frees from Holmes and a point from James Palmer saw Camross open up a ten point lead at half time.

It got even better for them on the restart, and they outscored Mountrath 0-3 to 0-1 in the first five minutes to go 12 points clear.

Dan Russell and James Hyland pointed for Mountrath to bring them back into the game, but it looked like the remainder of the game was going to be a procession for Camross.

With 15 minutes to go, however, Mountrath found another gear and came roaring back at Camross. They started by hitting four points in six minutes, as Kevin Keeffe, Dan Russell, James Hyland and Damien Duggan found the target to reduce the gap to six points.

Camross had no reply at the other end, and despite Mick Meade missing a glorious goal chance for Mountrath, three more points from Dan Russell got them back to within one score of Camross at 0-16 to 0-13.

The champions of 2007 managed their first score of the final quarter at that point, with Damien Keenan pointing’from close range to break Mountrath’s resolve.

They came back once again and James Hyland’s 65′ got them to within three again, but with no goal chance presenting itself, Andrew Collier’s late point sealed the win for Camross.