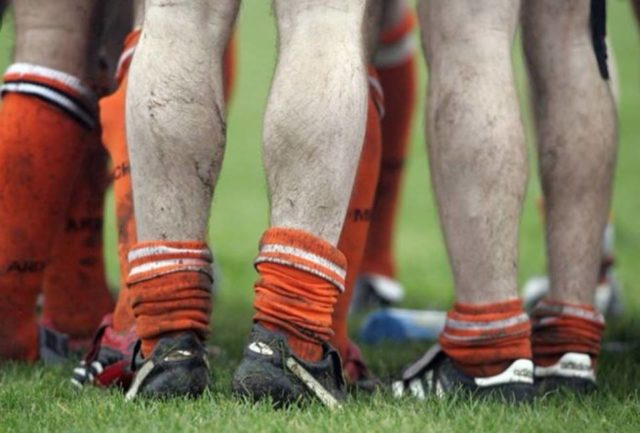 Timahoe will remain in the Intermediate grade for 2020 following a six point win over St Joseph’s in Crettyard this evening in atrocious conditions.

The rain that seems to be never ending at the moment was falling before Joe Brennan threw the ball in and it only seemed to get harder as the night went on – making it very difficult for the players.

St Joseph’s, who staved off relegation last year following a win over Barrowhouse at this stage, threatened to repeat the trick when Murtagh Condron’s point saw them hit the front with 20 minutes to play.

But they only scored one more point in the time that remained as Timahoe, led by the free-taking accuracy of Ruairi O’Connor, emerged as winners in the end.

Timahoe played with the breeze in the first half and although Murtagh Condron actually opened the scoring for St Joseph’s, Liam Ramsbottom’s charges took over after that and built up a five point lead.

Joe O’Connor, Jimmy O’Connor, Brendan Quigley, Damien O’Connor and Colum Dunne all raised white flags with the latter unlucky not to have a goal as his delicate lob over St Joseph’s keeper Ray Kealy just dropping over the bar.

St Joseph’s had a goal chance in that time too as a sweeping move involving Niall Brennan, Kevin Campion and Jason Campion saw James Smith go through where his shot was saved by Eoin Culliton.

Nevertheless, St Joseph’s dominated the final ten minutes of the half as Peter Kealy lashed over three quick points while Tommy Knowles added another to leave St Joseph’s trailing by the minimum at half time – 0-6 to 0-5.

They quickly levelled the game on the resumption though Jason Campion before Murtagh Condron landed his second point to give the Kellyville men the lead after 40 minutes.

They had a brilliant goal chance then when Seamus Farrelly was slipped in but his low shot was tipped away by former Laois goalkeeper Eoin Culliton.

That save would prove crucial for Timahoe as from there they turned the screw and went on to win the game.

Ruairi O’Connor drew them level and after that they would go on to score six more unanswered points to kill off the game.

Jason Campion finally broke Timahoe’s scoring spree with a point but it was goals St Joseph’s needed and Ruairi O’Connor put the seal on the victory with the final kick – landing his fifth second half point.

After two years at this grade, St Joseph’s will now play at Junior level in 2020 while Timahoe survive.