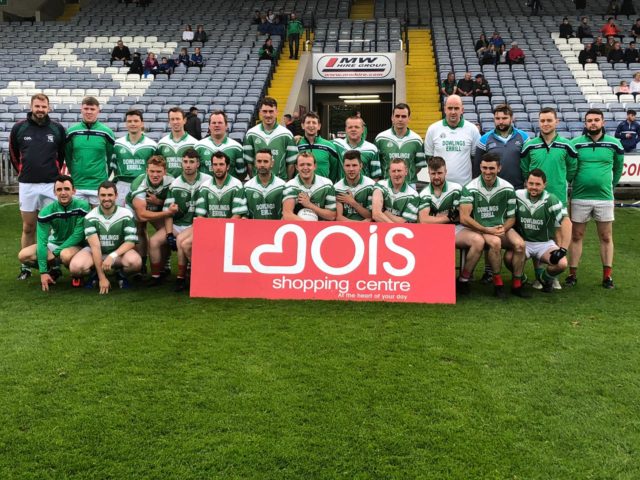 The footballing men of Errill have collected their third crown in four years after a 12 point victory in the junior ‘B’ finale over Mountmellick tonight.

Football is not something you would associate with Errill but the club, which borders Tipperary, have a serious knack of winning county finals in the code in recent years.

The rise of football in Errill is all the more remarkable due to the fact that they went 12 years without winning a single game.

It was their first football win of any description since they won a game back in 2002.

Since then, they went up the grades, winning the junior ‘C’ final against Rathdowney on St Stephen’s Day in 2016, and seeing off Rosenallis for the junior ‘B’ in 2017.

Things took a slight knock last year, with a first round loss to Camross.

A subsequent walkover to The Harps saw them relegated to Junior B again, where, following a Round 1 loss to Arles-Kilcruise, wins over Emo, The Rock and Rosenallis fired them back to this year’s final.

An exemplary second half by the Errill men saw them only conceeding one point within that time, while clocking on 2-6 for themselves.

After a tentative opening few minutes, the first point of the game came off the boot of Laois captain Paddy Purcell, his free taken on the 21 yard line dipping up and over the posts.

Colin McEvoy hit back for Mountmellick, sailing his shot over the posts to draw the teams level after eight minutes.

Errill then hauled themselves ahead, thanks to Patrick Wright. The corner-forward knocked in the ball along the ground after collecting a pass from John Purcell to make it 1-1.

Buoyed on by this, Eoin Bourke impressed the crowd by nailing a 45′ to bring Errill three ahead with 11 minutes on the clock.

At this stage, Errill were holding the majority of possession, but their players look less eager to kick their own points. Mountmellick hit a 2/2 shot rate as Jordan Williamson got his name on the board.

Errill claimed the next two points from Patrick Wright and Paddy Purcell (free) before a foul on Mountmellick’s Colin McEvoy in the Errill square meant referee Thomas Kennedy blowing his whistle for a penalty.

Darragh Hanlon stepped up to the plate against Errill’s Brian Meehan in goals. Meehan made the save, diving into the left bottom corner, but Hanlon was there to peg in the rebound to raise the green flag.

A Conor Comiskey point followed, and there was just a single point between the teams.

David Poynton and Williamson traded raising the white flag before Robbie Hibbitts stepped up to draw the sides level after 27 minutes.

However this would not be for long. Errill man Vinny Cleere was quickest to react to a high ball hitting off the post and back out, his rebound off the goal slicing into the back of the net and giving Mick Bourke’s side a three point advantage.

Stellar running from Paddy Purcell saw the ball landing to Poynton, who converted leaving four between the sides at the break.

Mountmellick were first off the mark after the interval via a Robbie Hibbitts point, Conor Comiskey winning the opposing kickout and finding his corner forward who lodged the ball over the blackspot.

However this would be the only score they would gather in the second half.

Paddy Purcell quelled the Mountmellick comeback by converting two frees putting five between the sides, as his brother John continued his dogged work out the field

The Purcells influence cannot be underestimated or understated in this game. Paddy’s undeniable speed cut through the Mountmellick defence as he launched in Errill’s third goal into the Mountmellick net.

Errill’s advance was now at eight points, with Tadgh Dowling and John Purcell totting up two more to give Mick Bourke’s side an eight point lead.

Subsitute Matt Meehan raised the white flag twice for Errill, the final two points of the game. After an additional two minutes were played, Kennedy blew his whistle and Errill were crowned junior ‘B’ champions once again.