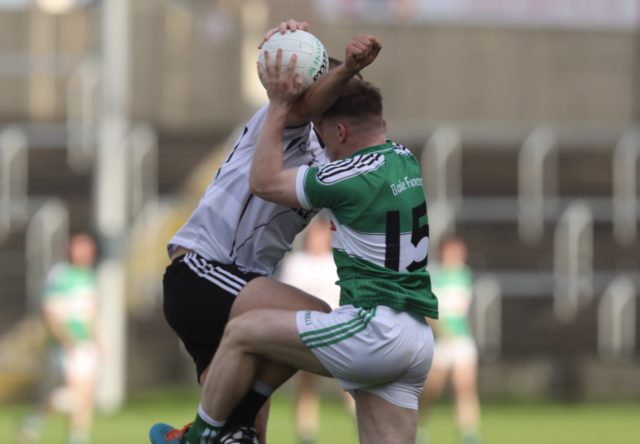 The brilliant Sean Moore and Jack Priestley helped themselves to two goals apiece as Ballyfin defied their 3/1 outsiders tag to run out 10-point winners in the end.

Having scored just seven points in their first outing against Graiguecullen, Ballyfin have now 4-13 against Crettyard and 5-17 against Arles-Killeen to book their place in the last eight of the Laois SFC. All but two points of their tally today was from play.

It was a game that entertained from the start with Sean Moore getting the game’s first goal after five minutes and going on to hit 2-3 from play in the first half.

Darragh Connolly was instrumental in most of their good play, the midfielder scoring three points from play and also playing a key role in their second goal.

Donie Kingston hit 1-6 in the opening half for Arles-Killeen in what was a hugely open game – but with Louis Duff getting a third Ballyfin goal before half time, they led 3-8 to 1-10 at the break.

Donie Brennan came on at half time for Killeen and got the first score of the half from a free. But Jack Priestley struck for Ballyfin’s second goal and points from Priestley and Louis Duff suddenly had them nine up and seemingly safe.

But it was a mad game and Killeen kept chipping away. The two Donies pointed and then the two Kingstons got goals within a minute of each other.

With 15 minutes to play the gap was back to a point.

But Killeen wouldn’t score again as Ballyfin got a settling point from James Finn and then hit 1-6 without reply, the goal coming from Priestly following an audacious lob over the over-worked Mick Leigh.

James Moore was outstanding too and hit a couple more points and by the closing moments the result was beyond doubt.

Arles-Killeen go out. Ballyfin look forward to another big day out.