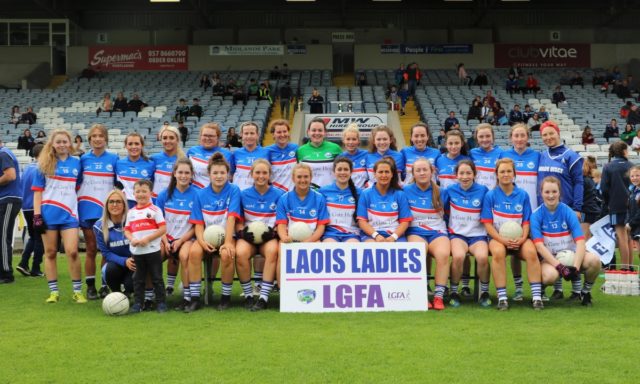 St Paul’s have won back-to-back championships after securing the Intermediate crown against Ballyroan in what was an enthralling contest. This follows on from their Junior triumph last year.

Ballyroan were on form from the off as Kate Whelan scored a goal after they had worked the ball up-field from the throw-in.

Shannon Costello replied immediately with a goal after a superb run from the 45-yard line. Emily McWey pointed from play.

Kate Whelan pointed a free as the game began to come to life. St Paul’s then scored two quick-fire goals.

Gillian Keenan and Aoibhinn Maher raising green flags as Ballyroan weren’t able to cope with the direct running of the St Paul’s forwards.

St Paul’s were to get in for their fourth goal when Emma Murphy fired beyond Than Phelan in the Ballyroan goal.

Ballyroan replied with a goal of their own with Emily Fitzgerald getting in for goal. Once again, St Paul’s scored a goal as Lawlor got her second goal of the game.

Emo led by six at half-time and increased their advantage at the start of the second-half as Ciara Crowley raised their sixth green flag of the game.

Whelan pointed a free before Murphy replied after good play with Keenan. Isabella O’Toole got in for their seventh goal as St Paul’s were well in control.

Whelan fired over two frees with Maher replying for St Paul’s with a score from play. Emily McWey got in for goal after a superb run by Rachel Fitzgerald set her up.

Whelan pointed a free before getting her second goal of the game as Ballyroan came back into the game.

Lawlor pointed a free to keep St Paul’s ahead by five points. Ballyroan were awarded a penalty after a foul on Emily McWey with Kate Whelan scoring her hatrick from the penalty spot.

Lawlor pointed from play with Emily McWey replying with a free. Lawlor tapped over another free to leave three between them going into stoppage time.

Shannon Costello put the game to bed with St Paul’s eighth goal of the game.

Senior Ladies football beckons for St Paul’s in what has been an incredible two years. 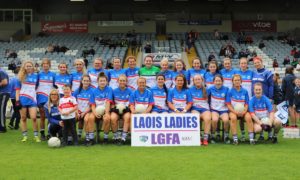 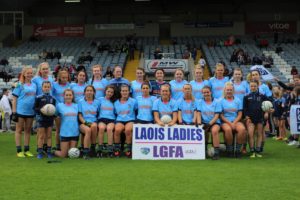