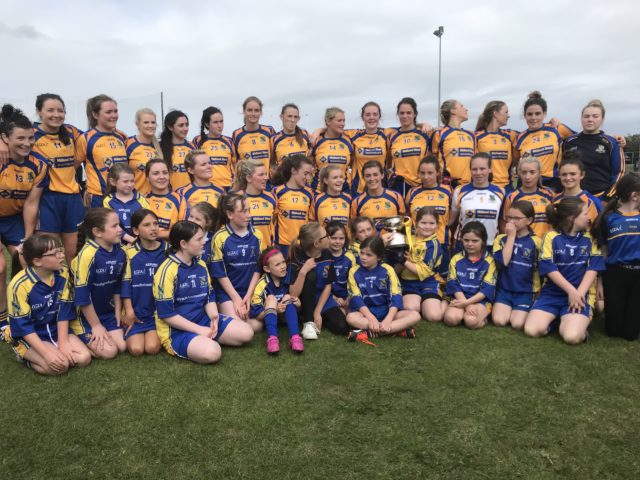 The Sarsfields ladies footballers have won a remarkable seventh Laois senior title in a row thanks to an impressive win over Timahoe this afternoon in Crettyard.

Timahoe, appearing in their first final since 2015 and looking for a first title since 2012,  put up a really good show for as long as they could and actually led at half time.

But Sarsfields showed all of their experience in the second half to eventually run out comfortable winners.

The first half was a right good battle with Mo Nerney leading the way for Timahoe as they raced into an early 0-4 to 0-1 lead.

Playing with the aid of the slight breeze, Timahoe struggled somewhat in the possession stakes but they caused plenty of problems when they went at the Sarsfields defence and could have had a couple of early goals.

Sarsfields weathered that bit of a storm quite well and got their noses in front thanks to a brilliant Meghan Dunne goal and the free-taking of Aileen O’Loughlin.

By the 20th minute Sarsfields led 1-4 to 0-5 but two Nerney points in a row soon had the sides level again.

Dunne brought her tally to 1-2 to put Sarsfields back in front and then Lorna O’Sullivan swung over a great point from play to double their lead.

Timahoe then struck for a great goal when they patiently worked the ball up the field before Nerney finished smartly to the net from close range.

Orla Hennessy added a point straight away and though O’Loughlin responded with another free, Timahoe went in at the break leading by 1-8 to 1-7.

But Sarsfields upped the ante early in the second half and a Joyce Dunne goal – after an initial good save from Emma Brophy – put them back into a lead they wouldn’t relenquish.

Aileen O’Loughlin, Mags McEvoy and Lorna O’Sullivan all pointed while Lauramarie Maher came off the bench and scored 2-2.

Timahoe replied with a couple of Mo Nerney points but it was never going to be enough as Sarsfields saw it out routinely for their ninth title in total.

After such a bright start, Timahoe will be disappointed at how their challenge fizzled out but they’ll be hoping to learn from the experience and come back better for it in 2020.

SEE ALSO – Remember the Game: Sarsfields come of age as they claim first title in 2008