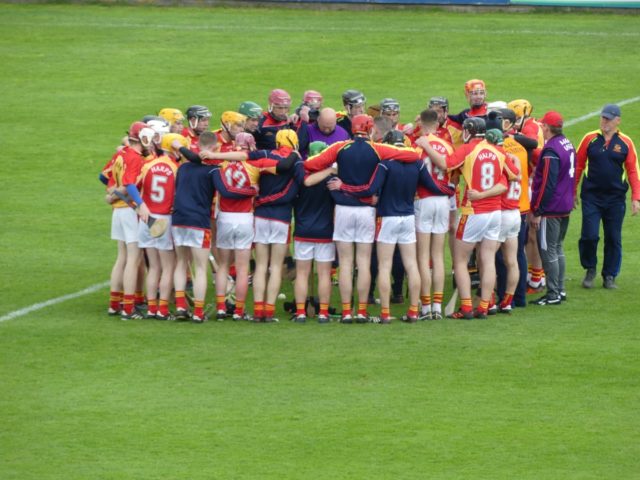 The Harps will face Park-Ratheniska-Timahoe in this year’s Junior hurling championship final after they came through tonight’s semi final replay against Castletown.

It is often the case that replays tend not to live up to the excitement of the drawn game but that wasn’t the case here as these two went at it hammer and thongs right from the off.

The game swung one way and then the other but in the end, it was Castletown’s failure to score for the first 13 minutes of the second half that cost them dearly in the end.

The game began with Ross Young and Seamus Lyons trading points before The Harps got the next three via Evan Deegan, Eoghan Doheny and Young to move clear.

Castletown responded well though as points from Craig Finlay, Ger Reddin, Seamus Lyons, Luke O’Grady and Kevin Carroll gave them the lead for the first time after 18 minutes.

Two Ross Young frees got The Harps back on level terms and although he converted another before half time, Castletown points from Michael Cuddy (2) and Seamus Lyons left them 0-9 to 0-7 ahead at the break.

But there would be 43 minutes on the clock before Castletown scored again as The Harps moved into a lead they would never relinquish.

Ross Young, who ended the game with ten points, slotted three more frees while Evan Deegan converted his second of the game from play to move The Harps 0-11 to 0-9 ahead.

Seamus Lyons finally hit back for Castletown with a close range free to narrow the gap to two points and that is how it remained with ten minutes to go as the sides traded scores.

Castletown got it back to one then with a Craig Finlay free but that was as close as they would come as The Harps finished strongly.

Shane Donohue, Fionn Whelan and sub Shane Tyrell all found their range in the closing moments to move the gap out to three as Castletown went in search of a goal that would send the game to extra time.

The best they could manage though was a late James Hooban free as The Harps progress to meet Park-Ratheniska-Timahoe in the final on Saturday September 21 at 6pm in O’Moore Park.