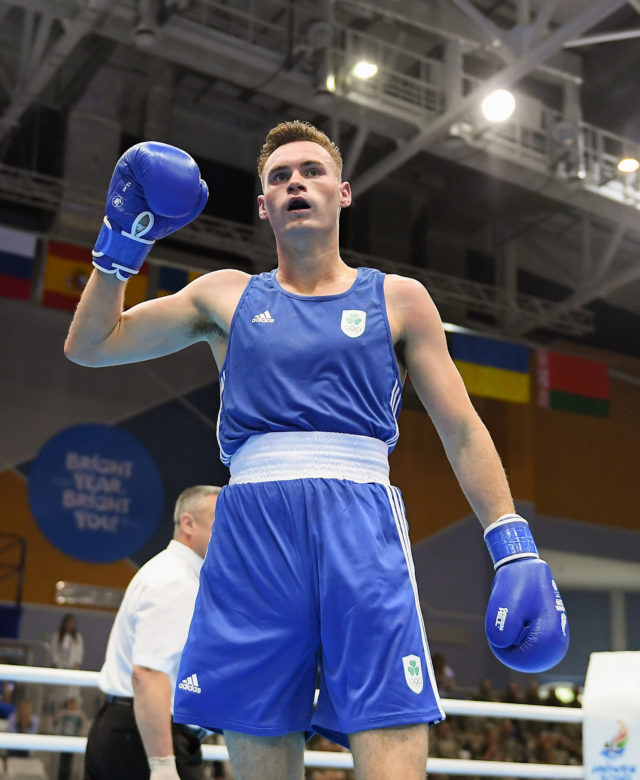 Portlaoise boxer Michael Nevin will fight for a place in the World Championship quarter-finals in Russia today.

Nevin beat Lithuania’s Vytautas Balsys on Friday having earlier beaten Andre Verme from Moldova in the opening round.

The 21-year-old earned three 10-8 rounds on Friday, boxing stylishly towards a unanimous-decision victory.

Nevin, who has for years been regarded as one of the best boxers in the country, won his first major international medal when he reached the semi-finals of the European Games in June.

He is also a three-time European champion at underage level, winning gold as a Schoolboy, Junior and Youth as well as World Championships bronze in the latter age category and should be well in the mix to qualify for the Olympics in Tokyo in 2020.

The boxing gets underway at 11am Irish time and Nevin’s fight is the second on the schedule. It is likely to be streamed live on the AIBA Youtube channel.

Nevin is one of seven Irish boxers in Russia for these world championships. Antrim welterweight Aidan Walsh is also in action today as he faces England’s No.2 seed Pat McCormack in the last 32 in a repeat of the 2018 Commonwealth final – a fight won by McCormack.

Kurt Walker, who is the reigning European champion and Irish team captain, is also through is also through last-16 stage of the featherwight class. The Antrim man will face Canada’s Robin Basran on Tuesday.