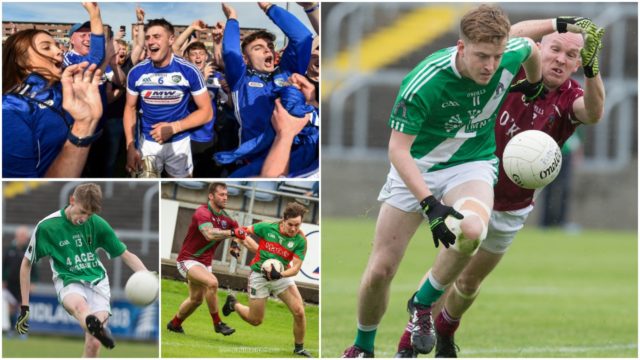 What a weekend of football that was!

We had shocks galore and some brilliant games as the Junior, Intermediate and Senior championships moved towards their conclusion.

In the senior, Ballyfin progressed to a first ever senior semi final while Killeshin are their opponents as they reached the semi final for the first time since 1959.

Neither team have ever contested a senior final in their history so we will have more records made in two weeks time.

Portlaoise’s bid for three in a row remains on course after they got by St Joseph’s but they will have to wait until Thursday to find out who they will face as they meet the winners of Portarlington and Graiguecullen who drew at the weekend.

In the senior relegation final, The Heath are safe after they downed Crettyard.

In the Intermediate, big wins for Clonaslee and Rosenallis in the semi finals has seen them set up a neighbourly clash in the final.

Then in the Junior, Castletown stunned Park-Ratheniska and they will meet O’Dempsey’s in the decider.

11 clubs are represented in this week’s Team of the Week and Ballyfin lead the way with four players.

Ballyfin keeper Foran has found himself under pressure in some of the games this year but he was simply flawless in the win over O’Dempsey’s at the weekend.

He made two great saves in the first half but his one from a Mark Barry shot in the second half was out of this world. His kick-outs were great too – and he gets the spot ahead of Killeshin’s Shane Coakley and Portlaoise’s Richie Downey who had fine games also.

This game for Killeshin was all about how they could curb the influence of Gary Walsh and their tallisman Stephen Attride did it superbly.

He held him scoreless from play and also got forward himself whenever he could in a brilliant display that set the tone for the rest of his team.

Clonaslee kept Mountmellick to 1-4, with just the goal of that coming from play.

And full-back Ger Reilly was central to that as he kept Mountmellick’s danger man Niall Mullen scoreless from play in a brave performance that saw him play from the front, cut out numerous attacks and also give Clonaslee an attacking platform with some strong runs out the field.

St Joseph’s have got close to Portlaoise on a number of occasions over the last number of years but that elusive win over The Town continues to evade them.

They made a right fist of this though on Sunday and key to that was the way in which they defended. James Kelly’s performance was particularly eye catching for the amount of turnovers and blocks he executed.

Is there anyone in Graiguecullen who does more running that Luke Alsybury?

He is constantly up and down the wing whenever he plays and his use of the ball is always intelligent. A really underrated player with a serious engine.

Portarlington came back to salvage a draw from their game against Graiguecullen at the weekend and the contribution of their captain was very important.

He scored a great goal in the first half and followed that with an excellent point as Port, with 14 men, salvaged a draw.

Portlaoise were functional at best in their win over St Joseph’s but it was enough for them to progress.

Gareth Dillon popped up with two points from wing back in this one and his pace is going to trouble most of the teams at this level.

Ballyfin have been the story of the championship and the return of this man to our shores after two years in the Middle East has undoubtedly been a key factor in their rise.

The Castletown footballers are the story of the championship with their winning run going all the way back to the 2016 Junior ‘C’ semi-final.

They won two games in the past week alone – beating Spink on Tuesday night in the quarter-final and then Park-Ratheniska in the semi-final on Sunday. Laois hurler Ryan Mullaney was outstanding in both games, scoring 1-5 against Spink and then 0-6 against Park.

A warrior for his team, Ricky Quillinan ruled the skies alongside James Finn in Ballyfin’s win over O’Dempsey’s.

The towering midfielder was then switched to full forward at the start of the second half where he scored that all important goal – so as a happy medium, we’ve selected him here.

Every team needs a good free-taker and David Aston is one of the most consistent around.

Operating at centre forward, the Killeshin man was instrumental in the win over Ballylinan with his vision from play also a crucial link to the full forward line.

It was a bad weekend for O’Dempsey’s at senior level but a good one at Junior as they reached the final for the second year running.

Eoin Finlay contributed 1-5 in their win over The Heath on Monday and will be hoping to continue that form in the final against Castletown.

Rosenallis ran riot against Portlaoise on Monday night to reach the intermediate final with considerable ease.

Ronan Murray played for 40 minutes and scored 1-5 before being substituted with the result wrapped up. He has a real eye for goal and is handy on the frees too.

Ballyfin scored 1-14 in their win over O’Dempsey’s and Sean Moore contributed almost half of that total – chipping in with seven points.

He tormented Shane Nerney throughout and won many of the four frees that he also kicked. His audacious lob at the end would have lifted the roof off the stand if it had to have dropped under the crossbar rather than over.

In the absence of Evin Keane and Daithi Carroll, The Heath looked vulnerable to drop to intermediate when they faced Crettyard in the relegation final on Friday night.

But wiley veteran Chris Bergin stepped up and kicked ten points as The Heath won by eight to survive for another year.