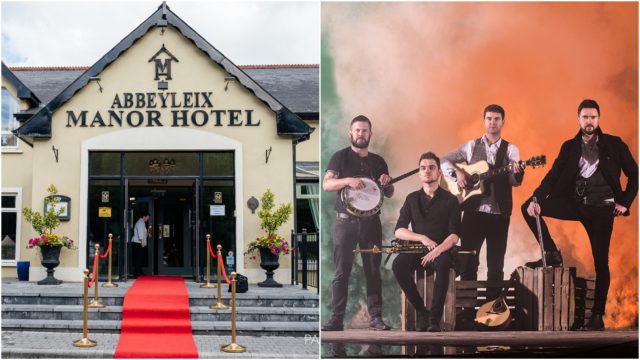 The owners of the Abbeyleix Manor Hotel have said they will be giving full refunds to anyone who has purchased tickets for this weekend’s concert by popular trad band The Kilkennys which has had to be cancelled at short notice.

A huge crowd was set to attend with hundreds of tickets sold and many more expected to show on the night.

“Unfortunately due to circumstances entirely out of our control, the concert scheduled for this Saturday in the hotel has had to be cancelled,” said April Kent, who owns and manages the hotel with her mother Jenny and brother Alex.

“The Kilkennys band were due to play but this is not now going ahead.

“We are contacting anyone who bought tickets to give them a full refund. We’re very sorry for the inconveniece and disappointment that this has caused.”

The Abbeyleix Manor, a long-standing family-owned hotel in Abbeyleix, have been hosting numerous concerts in recent times, including the very popular Smash Hits.

They are hosting Transmitter on the the Sunday of the October Bank Holiday weekend on October 27. Tickets are €12 and available from reception.