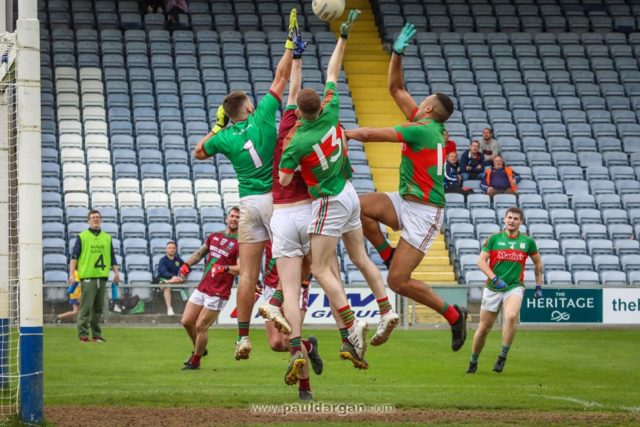 There is one huge game this evening as Graiguecullen and Portarlington face off again in the Laois Shopping Centre Senior Football Championship Quarter Final replay.

We look forward to that game below:

This was a real thriller on Sunday and hopes are high that the second installment will be just as entertaining.

Portarlington got the draw in the end with two late Jake Foster frees and they could have won it but his last free, eventually taken from in front of the stand after a squabble over where it should be from, dropped short and went wide.

Graiguecullen trailed for much of the first half but a goal before half time drew them level and they then played for 25 minutes of the second half with an extra man after Ronan Coffey was sent off.

The teenager picked up a yellow card in the first half and when he hand-tripped Mark Timmons in the second half, he was shown a black and then a red card by referee Michael Tarpey.

But they couldn’t get the job done and in the end, they were probably lucky to escape with a draw.

Portarlington went into the year as one of the teams many felt would trouble Portlaoise but after defeating The Heath in Round 1, they took two attempts to get over Ballyroan-Abbey.

This is their second draw and if they get over Graiguecullen, they will have a game against Portlaoise in the semi final next week.

Graiguecullen defeated Ballyfin in Round 1 but then lost to O’Dempsey’s in Round 2 to set up a Round 3 clash with Emo.

They came through that game and then drew with Portarlington at the weekend.

Their up and down form makes them unpredictable but if Portarlington keep their full compliment on the pitch, they should have too much.