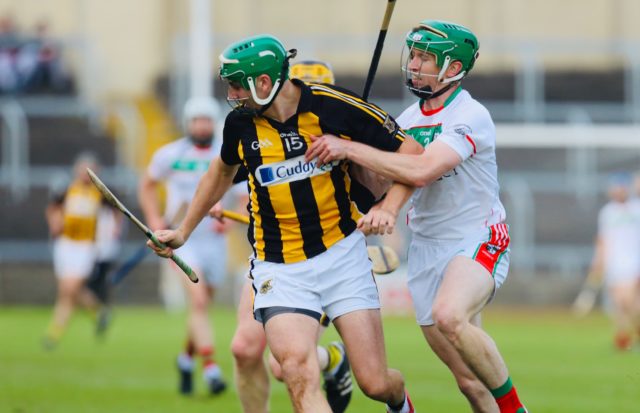 You couldn’t make it up. What drama.

Exactly a year after suffering serious dental damage in the 2018 county final loss to Camross, Ross King popped up with an injury time goal to send Rathdowney-Errill into this year’s Laois senior hurling final.

Camross looked as if they had done enough as the game entered injury time but King fired an unstoppable shot past Tadhg Doran to put Rathdowney-Errill one up and they hung on to claim victory in the most dramatic circumstances possible.

The result ends Camross’s bid for an historic third title in a row.

King missed a good chance in the opening minute and Mark Kavanagh was off target with a couple of frees that you’d normally expect him to score.

Frees dominated the opening half – with Niall Holmes hitting seven for Camross and Kavanagh six for Rathdowney-Errill.

Rathdowney-Errill did lead the way for most of the first 30 minutes but were never more than three clear and Camross hit four of the last five points of the half to leave the sides level 0-11 each at the break.

Three of Rathdowney-Errill’s backs were on target in the first half with John Purcell, Joe Fitzpatrick and Jack Kelly pointing from distance. Shane Dollard and Paddy Purcell, who lined out in a two-man full-forward line with King, also pointing from play.

For Camross, Dean Delaney hit two points from play with Darren Gilmartin and Andrew Collier getting one apiece.

A nice Ross King point from play pushed Rathdowney-Errill ahead early in the second half.

But the second half was very sluggish stuff altogether. And if it was Rathdowney-Errill that were guilty of missed opportunities in the first half, Camross were similar in the second as neither side made a convincing fist to win it.

Eoin Gaughan levelled things up for Camross and then Mark Kavanagh pointed frees either side of a Niall Holmes free.

Holmes cancelled it out with a point from play in the 49th minute and as they headed into the final ten minutes the sides were still level.

Mark Kavanagh pointed a free after Paddy Purcell was fouled (Rathdowney-Errill were annoyed that advantage wasn’t played) but Camross then got the next three to take the lead for the first time since the opening minute – with Holmes, sub Lorcan Burke and Craig Carroll all pointing from play.

Rathdowney-Errill looked to be on their way out as the game ticked into injury time but Ross King popped up and smashed an unbelievable shot to the net in the 61st minute.

It was just enough.

Rathdowney-Errill go through to play Borris-Kilcotton in the county final in two weeks time.

Camross’s dreams of three in a row are over.