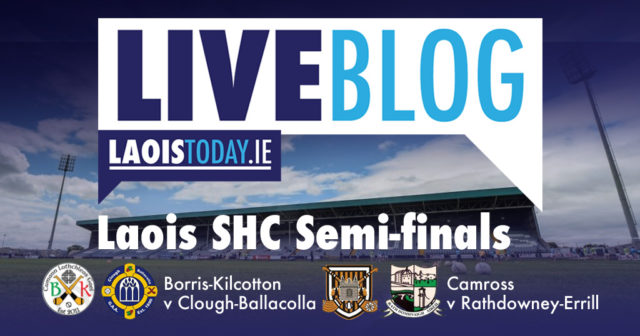 At the start of the championship if you’d been offered this double header as the semi-final pairings of the Laois SHC you’d certainly have taken it.

The four big clubs of Laois hurling have never all qualified for the semi-finals in the same year since Borris-Kilcotton came together in the 2011 season.

There was always at least one relative outsider. This year, however, is different and Camross, Rathdowney-Errill, Clough-Ballacolla and Borris-Kilcotton all take their place in this afternoon’s semi-finals.

While the weather and playing conditions in O’Moore Park will be far from ideal, the pairings themselves are mouth-watering.

Clough-Ballacolla, who won all three group games, meet Borris-Kilcotton in the first semi-final at 2.30pm while champions Camross, seeking to win three titles in a row this year for the first time since the 1970s, meet Rathdowney-Errill in the second game at 4pm in what is a repeat of last year’s highly controversial final.

Clough-Ballacolla were 2-17 to 1-16 winners over Borris-Kilcotton when they met in the second round of the group stages when two early goals set Canice Coonan’s men on their way.

They are set to be without both Stephen ‘Picky’ Maher and Lee Cleere, through illness, two players who helped Laois to the All Ireland hurling quarter-final in the summer.

Borris-Kilcotton were big winners over Ballinakill in the quarter-final and, like Clough-Ballacolla, also got the better of Camross in the group stages.

In the second game, Rathdowney-Errill come in as favourites against the champions having eased to three huge wins in the group stages over Ballinakill, Castletown and Portlaoise.

Camross, have, struggled to find form somewhat and lost to both Borris-Kilcotton and Clough-Ballacolla in the group stages but showed the spirit of champions to come from behind to beat Castletown in the quarter-final.

It’s all teed up for a fascinating afternoon of hurling and you can follow all of the action below.