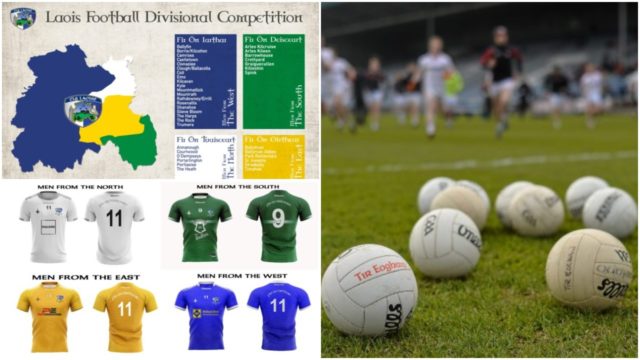 Laois GAA have confirmed the fixture dates, venues and the chosen charity for this year’s Divisional Football Competition.

The domestic club football season will conclude this weekend when Portlaoise and Killeshin clash in the senior football decider.

And the Divisional Competition is set to get underway the following week.

In a change to last year, all of the games will be played as double headers at venues around the county on Saturday nights at 6pm and 7.30pm.

The action gets underway in the LOETB Centre of Excellence on Saturday October 19.

Round 2 is in Crettyard on Saturday October 26 while Round 3 of the competition concludes on November 2 in Stradbally.

In another change from last year, there will be no ‘cup’ and ‘shield’ finals while instead, the team who finishes top of the table after the three rounds will be deemed the winner.

Meanwhile, there will be a small cover charge into all of those games and all proceeds raised will go to The Cuisle Centre.

Last year, around €4,000 was raised for the Kolbe Special School.

Chief orgainser Bryan Breen said that the four teams are coming together very well and there is a great interest from players.

He said: “Managers from the North, South, East and West are in the process of assembling their squads and there has been a huge level of interest to date.

“The referees have also agreed to donate their fees to charity which is a really great gesture.

“We are all looking forward to the games and hope that the people of Laois will get behind this competition once again.”