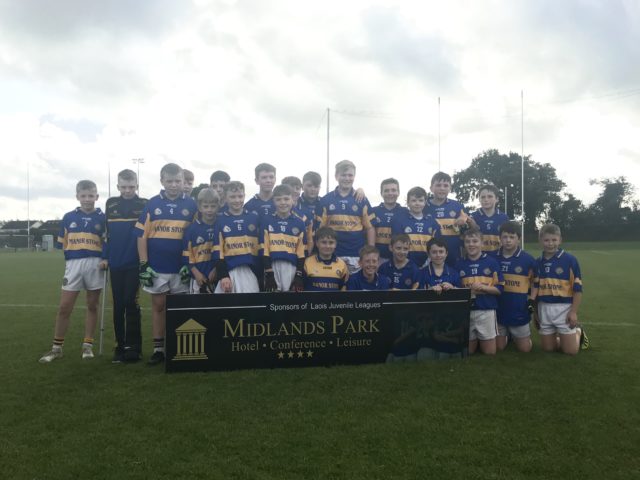 It was a busy morning in the Laois GAA Training Centre as the U-13 county finals took place throughout the morning.

Clough-Ballacolla claimed the U-13 ‘C’ title after a seven point win over Ballylinan.

The teams were well matched with good performances coming from all over the pitch in search of county title glory.

Clough-Ballacolla were first on the scoreboard with two back-to-back points from Eoin Duggan in the opening 4 minutes.

Patrick O’Connor scored Ballylinan’s first point of the game in the 12th minute to put a point between the teams.

Bobby Walsh answered back a free a minute before Sean McHugh scored Ballyinan’s third point of the half.

Clough-Ballacolla’s corner forward, Slevin popped over the last point of the half to leave his side leading by four points at half time on a scoreline of 0-7 to 0-3.

The second half was low scoring but the teams battled it out to the very end.

Patrick O’Connor raised the white flag or Ballylinan in the 41st minute but it was Clough-Ballacolla who had the last say in the dying minutes as James Rooney fired home a goal followed closely by another Duggan point.