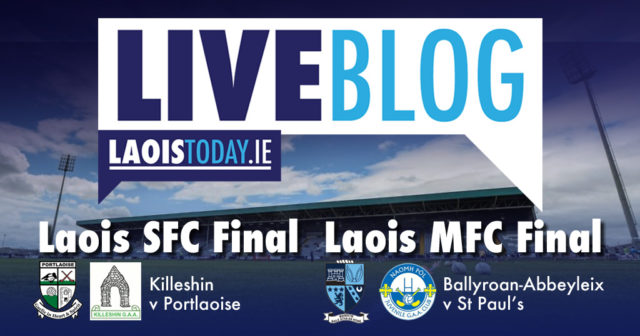 The big day of the Laois football calendar has arrived.

We have two huge games today as the Laois senior and minor football championships will come to an end.

The Laois MFC final between Ballyroan-Abbey and Emo-Courtwood is at 2pm.

While the SFC final between Portlaoise and Killeshin is at 4pm.

Ballyroan-Abbey ended their 47-year wait for a minor title last year when they defeated Portarlington in the decider last season.

It took them a replay to do it last year and they will be favourites to complete a two-in-a-row this year when they take on Emo-Courtwood.

Then attention will turn to the senior where Portlaoise come in as raging hot 1/7 favourites. Killeshin, appearing in their first final ever, are 5/1.

Killeshin are the story of the year. A little over 10 years ago they were junior. They started this decade in 2010 by failing to get out of their group in the intermediate championship.

Will they have enough to topple Portlaoise? Follow both games below: