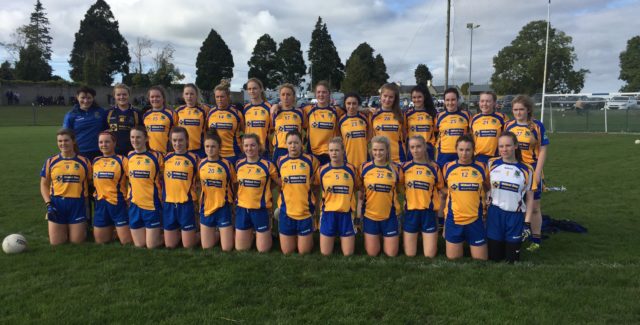 Sarsfields are into yet another Leinster Senior final after a clinical performance against a well-organised Simonstown side in Acragar this afternoon.

Sarsfields’ defence were on top throughout the game as their strong midfield runners combined with their clinical edge in front of goal was the makings of such a good victory.

Sarsfields got on top from the off with Meaghan Dunne getting the first score from play. Lauramarie Maher pointing a free shortly after for the home side as they took control from the throw-in.

Simonstown opened their scoring with a point from Kelsey Nesbitt. Lorna O’Sullivan opened her account for the day with a fine score from play.

O’Sullivan had a chance for goal with her effort narrowly missing the right-hand post. Sarsfields were resolute in defence and maintained a good shape as Simonstown struggled to make scores in the first-half.

Sarsfields hit three points in a row as firstly Rosemary Bermingham set up Amy Loughman to point before McEvoy pointed to get her first score of the game.

Loughman got another point shortly after as Sarsfields were in full control of the game.

Kelly Harris did score a free before the break to leave four between the sides at the break. Dunne scored the first point in the second-half before Shiels pointed for the Meath side.

Sarsfields raised a green flag after 40 minutes as Maher set up Loughman to find the top corner.

Simonstown rallied after the goal and scored one of their own as Nesbitt made a brilliant run to assist Shiels. Rachel Williams pointed from wing-back before Nesbitt got her second point from play.

O’Sullivan pointed to give the home side a five-point lead before Nesbitt fired in a goal to make it a two-point game with ten minutes to go.

Maher got in for goal as Sarsfields looked to have got enough on the scoreboard for the win. Harris and Ailbhe McHugh pointed frees before Maher pointed late-on to secure a four-point victory and their place in the Leinster final.

They will now face old foes Foxrock-Cabinteely in the decider who had a big win over Confey of Kildare this afternoon.

The Dublin champions are going for five Leinsters in a row and have beaten Sarsfields in two of the last four finals.