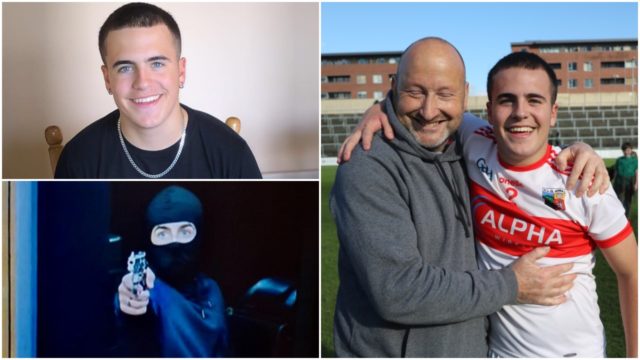 Darklands aired on Virgin Media One for the first time last week and episode two is set to take place tonight.

Laois teenager Ryan Burke plays one of the leading roles in the show as he is the best friend of the main character.

But yesterday in O’Moore Park, there was no time for acting as Burke was part of the Emo-Courtwood side that contested the Laois Minor football final.

Named at corner back, Burke was robust in his defending as he tore out from his own full back line time after time.

In a thrilling game, Emo-Courtwood saw a six point lead evaporate down to one as we entered the end of the allotted injury time.

But, with some outstanding saves from keeper Sam Krebs, Emo-Courtwood held on to win by the minimum once again.

It sparked scenes of wild celebration as Emo-Courtwood, with Ryan’s dad Darren as part of the management team, delighted to have edged a titanic affair.

Darklands is back for episode two tonight. The show is set in Bray, Co Wicklow and explores how young teenagers get dragged into crime – with one of the key roles being played by Laois teenager Ryan Burke.

The 17-year-old from Ballybrittas, who has just began his Leaving Cert at Colaiste Iosagain, plays the part of ‘Keith Sheridan’ – the best friend of the main character Damien Dunne.