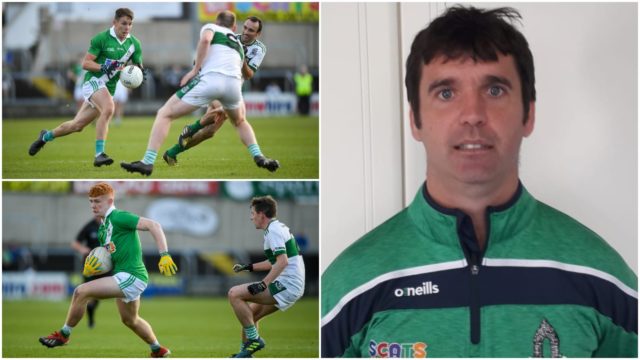 The men from the Carlow border led for different periods during the game but fell three points behind as we entered the closing stages.

Two David Aston efforts brought them back to within a point but unfortunately they didn’t score again as Portlaoise held on to win 0-14 to 2-7.

Speaking afterwards, Kerry native Maurice Browne, who is in his second year in charge of Killeshin, said the whole community should be proud of the effort his side have given this year.

He said: “There is super support for football in Killeshin and there is a super community where they all back it.

“Anything that goes on in Killeshin, they all get behind it. Even at the start against Stradbally in Round 1, we had huge support.

“Parents, neighbours, friends – they all came out and made food for the lads after training and games. It all buys into it.

“They are a great community in Killeshin and they can certainly be proud of those lads today.”

Browne, who managed Carlow CBS to an All-Ireland title in 2015, was disappointed that his charges did not come out on top.

He knew what Portlaoise were like – but he believed that they were there to be beaten.

Maurice said: “We didn’t look at Portlaoise’s record – we came into the game firmly believing that we had a great chance if we performed.

“We did perform, we just didn’t maybe get a break or two towards the end of it that would’ve got us over the line.

“Portlaoise’s experience probably came into it. It was a tight match and they have closed out their quarter final, their semi final and that stands to them.

“They are a fine side and you have to admire them for what they have done over the last 13 years. And on behalf of Killeshin, I’d just like to wish them all the best in Leinster – we’ll all be behind them.”