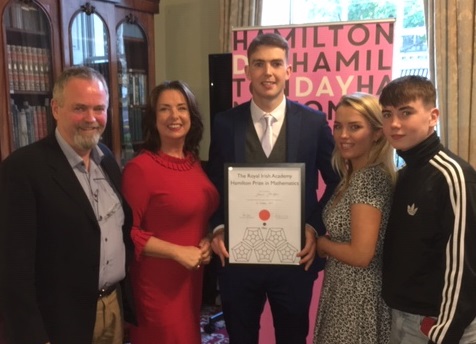 Portlaoise student, Frank Flanagan received a prestigious prize this week after being announced as one of the best Maths student in Ireland.

Frank received an award known as the ‘Hamilton’ award in the Royal Irish Academy in Dublin this week.

Every year the nine best students of mathematics in Ireland are awarded the Hamilton prize.

Frank received his Hamilton prize after being nominated by the University of Limerick.

He achieved all A1s in his degree in Mathematical Sciences so far in UL. He is now in his final year of undergraduate studies.

Frank lives in Portlaoise and was already celebrating this week after being on the Portlaoise football team who won the County Football Final after defeating Killeshin on Sunday.

Frank’s father Gerry Flanagan teaches in the local CBS in Portlaoise and his mother Pauline Madigan-Flanagan is a candidate with Fianna Fáil in the next general election.