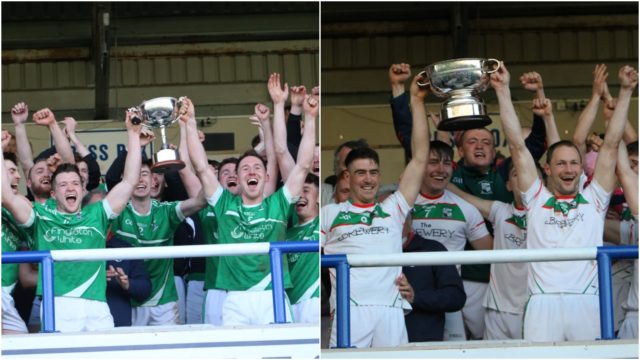 The curtain came down on the Laois club hurling scene at the weekend with Rathdowney-Errill winning their sixth Laois SHC title and Rosenallis completing the double and winning the Laois SHC ‘A’.

We look back on some of the main talking points from the two games here.

The man of the match in both the Senior ‘A’ and Senior finals was won by a defender, something which was in keeping with the low-scoring nature of both games.

Fiachra C Fennell, wing-back for Rosenallis, was man of the match in the first game as he put in a fine defensive performance while also scoring two brilliant first-half points.

And it was also a wing-back in the second game that scooped the top award – with Eric Killeen chosen after a fine display, just edging out Ross King who hit four points from play.

The two finals were a big disappointment overall with only the closing minutes of Senior ‘A’ game, when The Harps were frantically in search of an equaliser, really getting the crowd going.

There was also a brief spell of drama in the second game when Aaron Dunphy struck for the goal and they had another goal chance moments later but Rathdowney-Errill always had an answer.

It brings the curtain down on two poor championships overall. The Senior ‘A’ was blighted by a series of one-sided games and the final never took off until late on while the Senior never scaled huge heights either.

Rosenallis’s win in the Senior ‘A’ final completes not just a remarkable season but a remarkable couple of years, one that has seen them go from the third tier in both codes in 2016 to Laois’s only dual senior club in 2020.

It is an incredible achievement for a small rural club that are essentially drawing on the same group of players.

4 – More disappointment for The Harps

The Harps will be utterly disappointed with their final display again as they left it too late to play to their best.

It marks a second successive final loss in this grade and the third year running that that have failed to win this championship having been relegated in 2016.

They failed to get enough from their top players with Ciaran Comerford, John Brophy and Paudge Delaney all being kept scoreless from play.

They could have rescued a draw late on but the 1-2 that Rosenallis hit in quick succession midway through the first half, coupled with the injury to full-back Daniel Comerford at the same, was what they really struggled to come back from.

The amalgamation of Rathdowney and Errill in 2005 has been one of the great success stories of modern times in Laois GAA and they have now won a sixth senior hurling title since claiming their first in 2006.

They also finish this decade as Laois’s most successful club with four county titles, one more than Camross who have three. Clough-Ballacolla have two and Borris-Kilcotton have won.

It was also a significant day for the likes of joint captain Brian Campion, John Purcell, Joe Fitzpatrick and Shane Dollard who have all now been heavily involved in six county final successes.

6 – Final step proves one too far for Borris-Kilcotton

Borris-Kilcotton, too, will be disappointed with their final showing, scoring only 1-9 and never really getting going.

With Rathdowney-Errill limiting the frees they gave away and keeping PJ Scully to just six points overall, Borris-Kilcotton struggled to get scores elsewhere.

Scully, Joe Campion, Neil Foyle and Aaron Dunphy all scored from play – but they needed someone to really shoot the lights to have a chance. And it didn’t happen.

Rathdowney-Errill and Rosenallis now both go forward to their respective Leinster club campaigns in the coming weeks.

Rosenallis have very little time to recover as they are away to Carlow’s intermediate ‘A’ champions Bagenalstown Gaels next Saturday. If they win that they will have a home game against the Kilkenny intermediate champions the following week.

Rathdowney-Errill have a two-week break before they play Offaly champions St Rynagh’s – that game is due to be in O’Moore Park.

If Rathdowney-Errill end the poor record of Laois champions in Leinster and win that game then they will be up against the winners of the Carlow-Dublin tie in the semi-final.