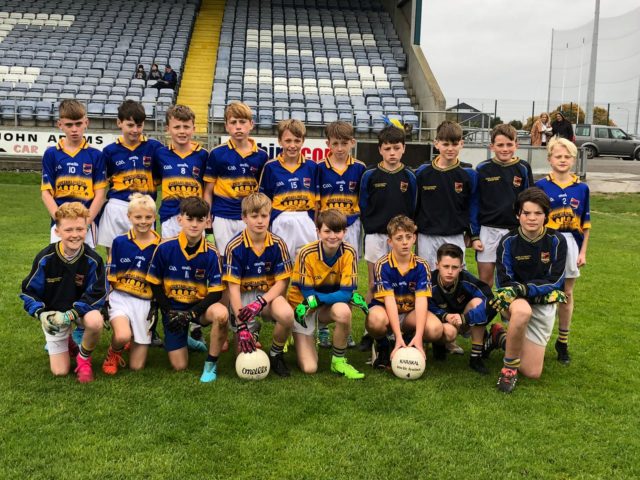 As the rain started to pour down, the last game of the day got underway in O’Moore Park where Killeshin took on Killenard in the Roinn 1 Boys Championship Final.

Killeshin were not long getting up and running with an early goal from Blake Rice.

Ultan Dunne followed up with two frees in a row to bring the game back to just a point but Killeshin’s Aaron Culleton and Callum O’Regan kicked two great points to keep their side ahead.

Dunne and Aaron Culleton traded points before Dunne claimed the next three scores – a goal and two points.

Killenard’s Tom Corcoran was next to raise the white flag just before half time to leave the score at 1-6 to 1-3 at the break Killenard’s favour.

The first score of the second half was courtesy of Aaron Culleton and Danny Malone followed suit with Killeshin’s second point.

Killenard’s first score of the half came minutes later thanks to Ultan Dunne once again who popped the ball over the bar.

Dunne hit another free before Corcoran and Callum O’Regan traded scores and Adam Farrell of Killeshin split the posts.

Dunne made another score look easy as it popped off his boot and in between the posts.

It was to no surprise that the next goal came from a superb Ultan Dunne who put Killenard ahead by six points heading into the final minutes which would be the last score of the game.