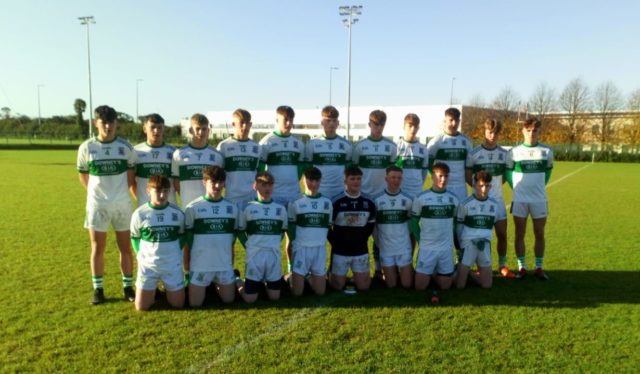 Portlaoise have completed a league and championship double defeating Graiguecullen after extra-time.

Graiguecullen got their first two scores through a Conor Harte free and a point from Joshua Bienko.

Portlaoise then began to take control as they fired over five points without reply. Jamie O’Callaghan tapped over a free before half-back Dylan Cahill split the posts.

O’Callaghan pointed his second free before Sean Devitt and Colin McEvoy opened their accounts for the game.

Jamie Murphy halted the Portlaoise scoring blitz as he pointed a free. Richie Whelan fired over a superb score as Portlaoise led by five coming up to half-time. Murphy fired over another two frees before half-time which left three between them at the break.

Graigue came out for the second-half with a point to prove and they proved their point as Murphy pointed a free before they got in for goal. Bienko set up midfielder Jack Byrne to blast the ball into the top corner beyond the hand of Brochan O’Reilly in the Portlaoise goal.

Portlaoise responded well to going behind as they got three points in succession. Whelan got his second point of the game. Connor Brown split the posts and Colin McEvoy got his second score from play.

Graigue would have had their second goal had it not been for O’Reilly as he denied Harte as he bore down on goal. O’Callaghan pointed another free to level the game before O’Donnell  put Portlaoise back in front yet again.

Graigue had the chance to send the game to extra-time but Murphy missed a free. Graigue were offered one more chance at bringing the match to extra-time and Harte dually obliged as he split the posts. The score being 0-13 to 1-10 after regulation time.

Portlaoise looked the fresher of the two teams in the extra-time period as O’Donnell and Fitzpatrick split the posts. Murphy got his first point from play as his effort was saved by O’Reilly over the bar.

Portlaoise wrapped up the victory with points from an O’Donnell free and Colin McEvoy. Graigue went in search of a goal, but Byrne’s free went over the bar.

Portlaoise have now completed a league and championship double at this age group, a super achievement for this group of lads.