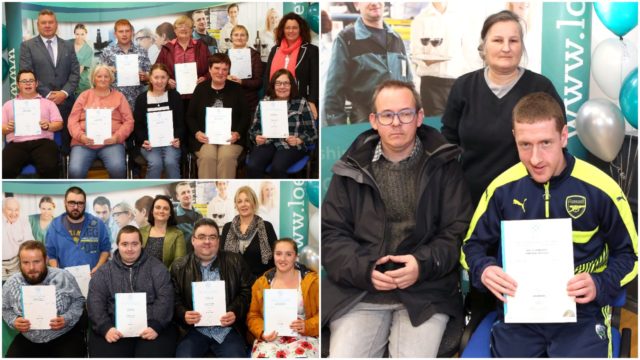 Certificates were presented from QQI Levels 1-5, in a wide range of areas including Business, Office Skills, Art and Design, Science and Engineering, I.T, Adult Literacy, Music and Drama and English for Speakers of other Languages, to name but a few.

The afternoon commenced when Stephen Bergin, a current learner in the centre, greeting the crowd and formally welcoming everyone to the ceremony.

Cathy Clear, another learner, also gave an account of returning to education at 67. She spoke about confiding in a friend of hers that she could not read or write and this friend helped her to make that step back to education.

Brimming with pride, Cathy, received her QQI certification at the Awards yesterday and thanked all the people who helped her in the Adult Literacy Service, but especially thanked her friend Colette for encouraging her to take the first steps and her tutor Seamus who made the one-to-one sessions both interesting and fun.

Before presenting some QQI awards, Padraig Hennessey, Resource Worker in Portlaoise FETC told the crowd about the new initiative in the centre; “Maths Through Darts”.

He explained how the game can be used to demonstrate everyday mathematical concepts and the great fun the group had while also learning maths! Padraig quoted Tony Flanagan, one of the learners on this course, and how useful the course was to him, particularly with helping his grandchild with Maths homework.

Centre Manager, Lisa McEvoy discussed progression options for learners at the centre, stating how adults tend to develop a love of learning and move on to a range of further education and training options within the centre, or access employment.

Kay Doocey reiterated this when she shared her story of how after completing a full Level 3 Award at Portlaoise FET Centre, she has now employment in both retail and office administration.

Lisa spoke about the sense of community in the centre and thanked all the staff for their hard work and commitment.

As learners received certificates, great applause filled the room from teachers, family and friends, in support of the fantastic achievements throughout the afternoon.

Current learners from the Business Administration course, Nicole Delaney and Reda Andruskiene clearly demonstrated how an adult learner can take a range of routes when returning to education.

Nicole initially was a participant on a Family Learning Programme in a local school and Reda commenced her journey when she decided to improve her English.

Colin Flaherty, Further Education Manager, concluded the afternoon by thanking staff and learners, but especially applauded the families who supported the learners within their chosen course of study.

Michael Scully was on hand to capture some great pictures from the event.