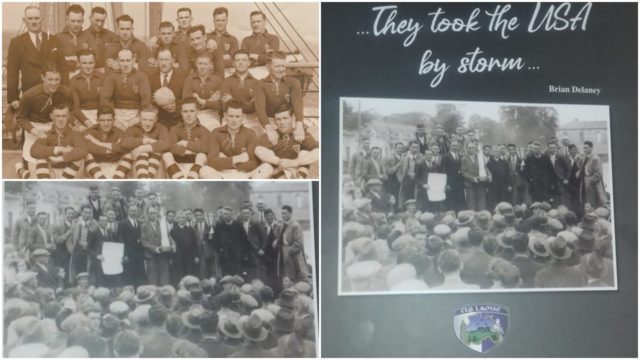 After two very successful book launches in Stradbally and Graiguecullen the book ‘They took the U.S.A by Storm’ written by Portlaoise’s Brian Delaney sold out.

The book details the Laois team of 1938 and their historic trip to the U.S.A in print and photographs.

The Laois senior footballers have never won the Sam Maguire but they came extremely close to it on three occasions in the 1930s.

While they didn’t win on that day, this period is widely regarded as one of the most successful in Laois’s history.

As recognition of their status at the time they were invited to tour America in 1938.

And now, 81-years later, Brian Delaney, son of team captain and Stradbally native Jack, has penned a book which gives a fascinating account of how the tour came, their voyage on the SS Manhatton and the successful tour itself.

“And the even more remarkable thing about that team was that after they returned from America, they went on to win their third Leinster in a row by defeating Kildare.”

A reprint of a further 200 books is now available in the following Newsagents: AllBooks (Lyster Square), Paddy Dowlings (Old Dunnes Stores) and in Martleys on the Borris Road.

The book costs €20 with all the profits donated to charity.