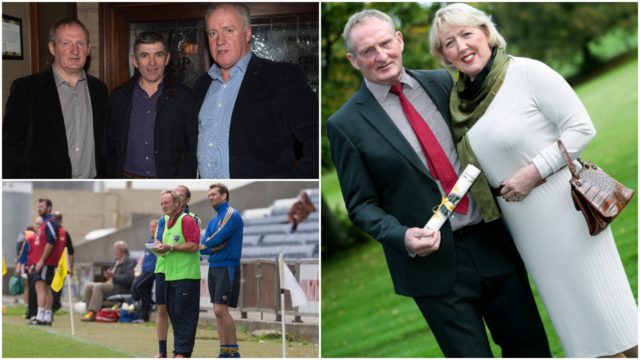 Dessie Brennan is a legend.

No, that’s a bit of an understatement. He’s a living legend. A legend in his own lifetime.

That’s the sort of thing he’d kill you for saying. For the gregarious and outgoing larger-than-life character is quite bashful, shy even, at the back of it all.

They have just given him another medal. This one’s for bravery.

Realistically, he’d rather not talk about it, in case lads would think he’s boasting or something. The lads are his brothers, the St Joseph’s boys, and the GAA fraternity, not just in Laois but in surrounding counties and all over the country.

How would he face the likes of Mick Dempsey or Richie O’ Connor and those, the slagging would be savage.

Well, whether he likes it or not, they’ve given Dessie Brennan a medal for bravery, but the only medal he wants is to see his beloved St Joseph’s win another senior title.

It would be a brave man who’d be brazen enough to tell him that might not happen in his lifetime.

But it’s eluded him, he knows it and is the first to admit it, over the past four years in which he’s been in charge of the Joseph’s seniors. Portlaoise, the dominant force in the county for years now have been the stumbling block every time.

That’s hard to stomach for a man who captained St Joseph’s to their first ever senior title way back in 1973. He went on to win 7 in all.

Dessie could tell you the score, the scorers, the wides, the missed chances, every kick of the ball in every single game they came a cropper to The Town.

More painful as that is, he’d still much rather talk about those football matches than this medal for bravery business. That’s Dessie for you.

They love him in Joseph’s and he loves them. Even though he has worked as a guard on the front-line for over 40 years in the heart of the inner-city and reared his own family of seven, 5 girls and 2 boys, with his wife Marie in Saggart, the Swan, his home place, is to where he always returns. This is Joseph’s country.

When I do eventually steer him around to the primary purpose of our interview, that he has just been nominated for and received a National Bravery Award, he deflects my line of questioning from himself to talk about the extraordinary achievement within his family.

It is most likely unique that four members of the one family have all been awarded honours for bravery. But that is the distinction that Dessie and the Brennan clan hold.

In case anyone thinks he is spoofing about himself Dessie puts it all down to doing a day’s work and all part of the job. I think he has picked up these diversionary tactics and tricks of the trade from interviewing and interrogating so many hard chaw’s in the line of duty down the years.

He knows them all in the inner-city and they all know him. He’s put many of them away. There’s been scuffles, to put it mildly. Yet there is this regard, respect, reverence they hold for him. Mr ‘F****n’ Brennan. He smiles at that. There are stories he could tell, but certainly not here…

Dessie is one of a family of 14 from The Swan, 8 boys and 6 girls. Four of the brothers went on to join the Gardai – Kieran, Leo, Derek and Dessie himself.

Kieran who also has quite an impressive GAA CV with Joseph’s, Laois and Dublin Club Ballinteer St. John’s, was of course the man who managed Laois to that fantastic National League win in 1986 when the county demolished all before them, spectacularly so from Division 4.

Unfortunately, the massive potential of that panel was to be short lived when they were undone in controversial circumstances in that infamous championship first round against Wicklow in that dreaded Aughrim pitch. That notorious Sunday in Aughrim has since gone down in the lexicon and lore of Laois GAA as a byword for daylight robbery.

And while we’re on the subject of robberies, it was another daylight robbery that led to Dessie and his son David both being awarded medals for bravery.

That story of that extraordinary intervention when father and son foiled an armed robbery on a Paddy Powers bookies on a sunny Saturday in July 2013 is well documented. It was even captured on CCTV.

David who is a serving Detective in Clondalkin was awarded the Scott Medal for bravery for his part. Dessie who was retired from the force after 41 years’ service was duly awarded the civilian equivalent, when the court service and the legal eagles involved in the trial of the culprits nominated him for a National Bravery Award.

Ironically, even the defence legal team for the robbers lauded Dessie’s courage and sense of civic duty and endorsed his nomination for the award. Dessie has that effect on people.

Looking back on it now with the court cases over and out of the way, all the evidence pointed to a selfless act of bravery. Some might say foolhardy. Dessie simply says, it was their duty, what else were they expected or would you expect them to do, he shrugs, without the slightest hint of bravado.

There is the small matter of a loaded revolver which was recovered from the balaclava pillion who was brandishing the pistol, firstly at the terrified punters in Paddy Powers and later at our heroes as the alarm was raised and the pair attempted to make their escape on a motorbike. There were four live rounds in the chamber.

It wasn’t to be their lucky day for the hapless thieves as Dessie and David Brennan were next door having a pint, when a frantic member of the public scrambled through the door crying out for help.

What happened next is quite frankly the stuff of legend, like something straight out of the movies. You’d be expecting Brendan Gleeson and Colin Farrell to show up. Colm Meaney is too small to play Dessie.

The two Brennan’s burst out of the pub, “just 20 paces from the bookies” in Garda speak as explained by Dessie.

There was a Kung-Fu style kick taking out the robbers as they tried to make good their escape; a consternation as the pair were wrestled to the ground; the bike engine revving and the back-wheel still spinning furiously, the gun spilled out onto the tarmac. With the villains subdued, David Brennan secured the pistol, breaking open the barrel to discover it was loaded with four live rounds. A sigh of relief before the cavalry arrived from Clondalkin Garda Station. Incredible stuff really. It was captured on CCTV.

“When it’s all done and dusted, that’s something that does cross your mind, if it all went wrong. They did have a loaded gun,” says Dessie. He wasn’t out of the woods yet, as he still had to face home. Not normally fearful, he does admit that his wife, Marie, wasn’t impressed with him “for putting her little son at risk.”

The circumstances in which Dessie’s two brothers Kieran and Derek both earned their bravery medals are no less sensational.

Back when Kieran Brennan was in his early 30’s in 1979, along with another Donnybrook based detective, Martin Donnellan, they apprehended three armed bank robbers who had fled from the Christmas week raid on Bank of Ireland at Stillorgan Shopping Centre. As the gang made good their escape they headed for the Wicklow Mountains.

Bur Kieran and his colleague anticipated their next move and while out on routine patrol in their blue Avenger they too headed for the hills to quite literally cut the robbers off at the pass. That they did so brandishing only walkie-talkies which they used to trick the thieves into believing they also had guns was a daring bluff indeed.

That’s the way the Brennan brothers were brought up it seems. At the time their mother Kathleen was reported in the papers as saying she would expect no less of her son as, “He is a very conscientious man.”

Conscientious and brave too, their other brother Derek, who had left the Garda and later joined the prison service, when his bravery in the face of a riotous situation which led to him and other officers being trapped on a landing by a life-threatening fire, also earned him honours to acknowledge his courage, in the face of mortal danger.

That’s quite a haul of medals for the Brennan boys as the robbers keep going away empty handed.

“That’s what you are paid to do, that’s what the State pays you for,” says Dessie, keen to get back to the GAA.

But empty handed Dessie too came away following his most recent four-year sojourn in charge of Joseph’s.  All-in-all he has been managing teams without a break for over 30 years. Apart from St Joseph’s, there’s been successful stints with Moorefield, Eadestown, Kilcullen and St Mary’s in Saggart. As for St Joseph’s?

“We under-achieved I’d say over the last four years,” he maintains, not going easy on himself and expecting no one else to either.

“We have had some good underage players and some good teams so hopefully now with the new management, with Mick Dempsey and Joe Higgins who is an All Star and Liam Brophy, hopefully they can make the difference.” Nothing would please Dessie more.

“Did I tell you that I captained Joseph’s to their first senior championship in ‘73 and that we won 7 titles? We paved the way for Dempsey and these, now I like telling that story,” revels Dessie, with more than a little mischief in his eyes and that trademark smile growing on his face.

Tell that story Dessie. It would be a brave man that would suggest you can’t!