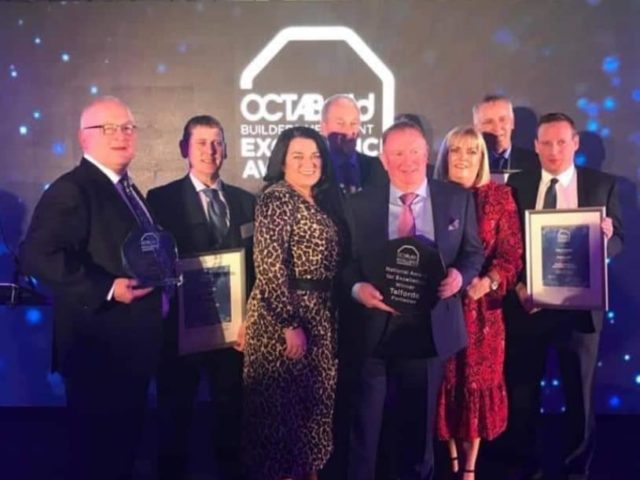 Telfords Portlaoise has been named as the national Builders Merchant of the Year for 2019.

It has won both the National and Leinster awards in the Octabuild Builders Merchant Excellence Awards 2019.

The Octabuild Builders Merchant Excellence Awards 2019 were presented on Thursday 7th November at a gala event in the Aviva Stadium in Dublin.

This is the third occasion that Telfords has been the national winner since these prestigious awards were first presented in 1986. It won the national award in 2001 and again in 2007.

Liam McEvoy, Managing Director of Telfords in Portlaoise, was joined by some of the Portlaoise staff at the awards ceremony in Dublin on Thursday night.

Telfords was established in Portlaoise in 1990 but the Telford business dates back to 1890 when its first store opened in Mountrath.

According to the independent judging panel Telfords Portlaoise is an incredibly impressive and commercial store.

It is very professionally managed using live trading and margin mix data. The store is very innovative and not afraid to embrace change. The employee share scheme is highly innovative and the intense focus on health and safety standards is market leading. 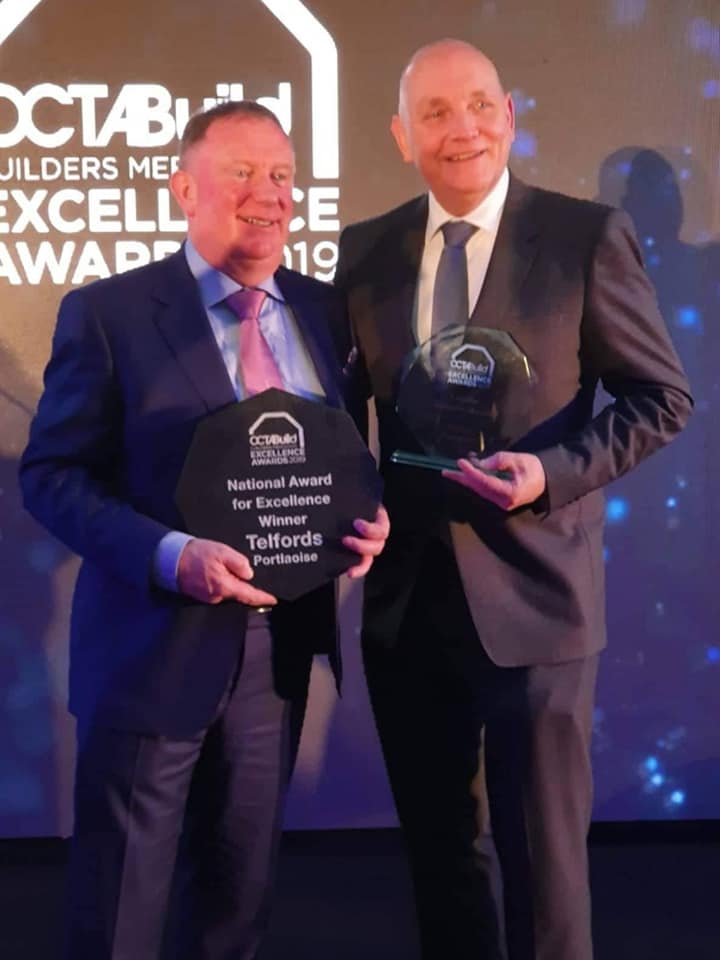 Overall the judges were really impressed with the store, its systems, customer service initiatives, strong health and safety ethos, promotions and community involvement, all led by an incredibly impressive and professional team.

The Octabuild Awards, which have been acknowledging the best in the builders merchant trade for 35 years, were revamped for 2019 with a renewed focus on excellence.  This is to better reflect the modern builders merchant sector in terms of business management, customer service, sales and marketing, innovation, leadership, diversity, partnership and communication.

Commenting on the quality of the entries, Chair of the independent Judging Panel, Liam O’Gorman, said: “It is clear that the industry in which today’s builders merchants operate has evolved hugely and that merchants have led the way in embracing this changed landscape.

“More sophisticated business systems, an enhanced skill base and a keen focus on the environment, health & safety and assistance for the local community feature strongly across the country and is highly commendable.”

Octabuild Chairman, Mark Filgate said: “It’s important for Octabuild that the Awards highlight to the building and construction industry the excellence of Irish builders merchants.

“We are delighted with the enthusiastic response to the new style awards this year where merchants from all over the country have put themselves and their teams forward to showcase what’s excellent in the industry.”