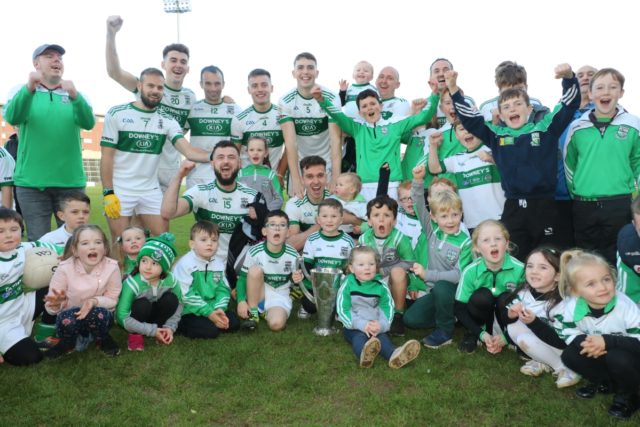 We’ve just about caught our breath after that one.

The Portlaoise footballers have had many great days in the Leinster club championship over the years – but today they broke new ground when they needed a penalty shootout to beat Wicklow champions St Pat’s in Aughrim.

It was a crazy game that had a crazy ending and here we delve more into how they did it.

He was recently crowned Laois Senior Football Player of the Year for 2019 and he showed here once again just why he is so good.

Lillis kicked two absolutely brilliant points and when his team looked dead and buried in extra time, he popped up with a goal that gave them the lead briefly before the penalty shoot out.

Graham Brody’s absence has been a peculiar one for all of us looking in from the outside but, with Portlaoise in real trouble in the second half of normal time, manager Niall Rigney opted to bring him on for his first action of the season.

He was instrumental in points for Conor Boyle and Kieran Lillis with his trademark runs up the field while he also scored a brilliant penalty in the shoot out.

And speaking of the penalty shoot-out – that was the last thing any of us were thinking about when we arrived in Aughrim this afternoon.

When the game finished level after extra time, referee John Hickey signalled for penalties. Horrible way for St Pat’s to lose and I’m still not convinced if it is GAA or soccer. But Portlaoise’s penalties were excellent and they deserve all the plaudits.

St Pat’s really frustrated Portlaoise throughout by doing two fundamental things excellently – defending and winning their own kick out.

All bar one of Shane Doyle’s kick outs found a teammate in the first half while Conor French operated as a sweeper. St Pat’s dropped all of their team bar Thomas Kelly back behind the ball at times when they were defending and this worked because Portlaoise were too slow to move the ball up the field.

In truth, it was only when Graham Brody, Damon Larkin and Ronan McEvoy came on and added pace to the attack that Portlaoise looked like they could hurt them.

5 – Portlaoise’s strength from the bench

We mentioned Brody, Larkin and McEvoy already above but Paul Cahillane, John Kavanagh and Colin Finn also came on to add something to this Portlaoise team.

They were without Gary Saunders for the game through illness and you’d imagine he will be fit for the semi final. So all of that just shows how deep their squad is and that makes a huge difference at this level.

6 – Portlaoise dig it out again

This makes the fifth time that Portlaoise have been pushed to the pin of their collar in a game this year and once again they have found a way to win.

Courtwood, St Joseph’s, Portarlington and Killeshin all ran Portlaoise close in Laois and St Pat’s did so today. Always finding a way to win is a serious attribute to know you have.

Portlaoise are now back at the semi final stage for the second year running but this time they will be at home.

Last year, Portlaoise lost out to Kilmacud Crokes and this time they will take on Carlow champions Eire Og who defeated Sarsfields of Kildare this afternoon.

Portlaoise will face Eire Og on Sunday November 24 while the other semi final sees Ballyboden St Enda’s of Dublin take on Westmeath side Garrycastle.