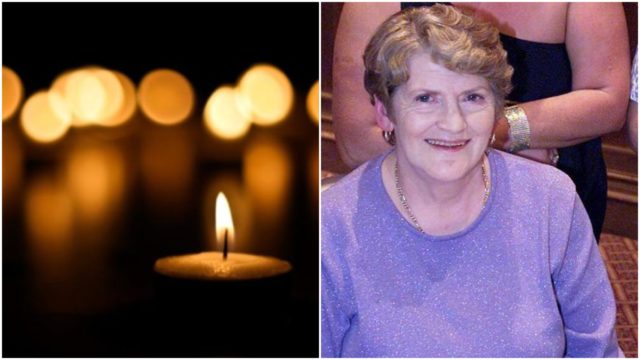 Bernie Daly who died on Monday was the former proprietor of one of the region’s best known and most popular pubs.

Bernie, who was pre-deceased by her husband Vincent, ran the  Portlaoise Arms and St Patrick’s Taverns for years. The landmark premises was prominently located on the corner of Market Square and the Abbeyleix Road in Portlaoise.

It was a great stopping off point for match goers from all over the country and a renowned staging post for weekend socialising before people headed off to dances and night clubs. Both Bernie and her husband Vincent had also previously run pubs in the UK and in Offaly.

The Portlaoise Arms was a thriving concern under Bernie’s hands-on and personable style. Always with a kind word and helpful manner she gave some of the best barmen in the locality their start. The premises was among the first to diversify into food and was renowned for its good value lunches.

Ironically, Bernie’s passing marks the second death of a vintner from the Market Square this week, after Lockey Delaney whose funeral is this morning (Tuesday) at 11.30am.

Bernie will be fondly remembered by her many patrons, staff, friends and neighbours.

Her own life was not without tragedy as her only child, Jimmy, was killed in a road traffic collision near Borris-in-Ossory while he was still in his twenties. It was a terrible heartbreak for Bernie and Vincent to suffer and it is true to say that while they bore their loss with great dignity, they were never the same after.

She was a retired publican from the Portlaoise Arms and Powerscourt, Abbeyleix Road, Portlaoise. She was predeceased by her beloved husband Vincent and dear son Jimmy and loving brothers Paddy and Jim.

Reposing in the Chapel of Repose at Portlaoise General Hospital this Tuesday evening from 5pm. Recital of The Rosary at 7pm.

Reposing on Wednesday morning from 10am. Removal at 10.45am to The Church of The Nativity of The Blessed Virgin, Kilcormac arriving for 12 noon Requiem Mass.