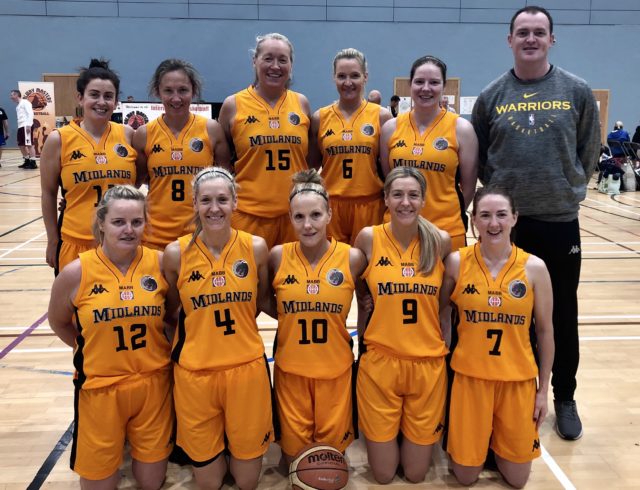 What a great to top off an already spectacular game!

Galway will see itself become the European Capital of Culture in 2020, however the first weekend in November saw it become a festival of basketball as it hosted Galway Masters Tournament.

The Midland Masters ladies headed West last weekend to take part in their forth masters tournament of 2019.

Their first game against English side Nunthorpe gave them a comfortable win in their opening pool games, but their second game they met a tough and tight Mayo Mustangs side who dominated the game offensively and defensively.

The ladies lost out to Mustangs who eventually went onto win the Joanna Lambe cup.

Not deterred by their lack lustre performance the ladies had the Silver plate to play for on the Sunday.

All profits of the night went to the Aoife’s Clown Doctors a magnificent charity aimed at helping sick children in hospital.

While the ladies danced the night away their focus was on the trophy the following day.

The Midland ladies were slow out of the block against a feisty Mayo side.

It was neck and neck with little between the side until the last quarter where the Midland ladies stepped up their defence and offence and led onto a comfortable semi-final win.

The final, took place an hour later where the Midland ladies met Sheffield.

With the Silver Plate to play for the Midland ladies didn’t make the best start.

Sheffield were fast to secure a comfortable 12 point lead by half time but Midlands made some vital substitutions and with outside shots finally dropping for the ladies they pulled away to secure the win over their tough opponents.

They triumphantly lifted the Silver Plate after a tough weekend of basketball.

The Midland ladies, a panel of 17 women started their masters journey in March this year.

Their first year on the Over 40’s masters tournament scene has seen them win the Kilkenny Masters in March, reach the semi-final of the Dublin Masters in May, win the Torpedo Longford Tournament in September and win the silver plate in Galway in November.

‘It’s been an amazing year for us,” said Pam Grogan, team manager of the Midland Ladies.

“I didn’t envisage our inaugural journey being this successful! I’m so proud of every single one of my team mates and our amazing coach”.

Peter Duignan then went on to say “The average age of the ladies is 40 and they train and work so hard together as a team.”

The Midland Masters have also set up a Men’s Masters team for the 2020 tournament season.

Expressions of interest are still being sought for the men’s team. If you are 40 or turn 40 before the 31st December 2020 and you are interested in playing please email pamgrogan23@gmail.com for further information on eligibility to apply.