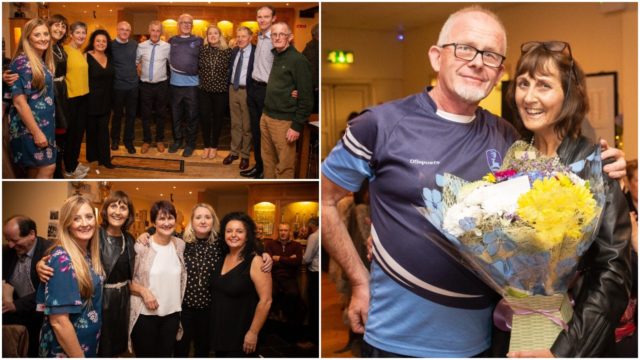 A huge gathering of friends and founders celebrated the 60th anniversary of Ballyfin AC in the Deadman’s Inn on Saturday November 9.

The club honoured members past and present who had contributed to its outstanding success down the decades.

Frances Harney welcomed everybody and thanked all who had worked tirelessly on behalf of the club for so many years. She expressed her deep gratitude to the present committee for making the event happen.

It was she said so important to recognise each individual contribution. Jimmy Finn in his summary of the sixty years touched on many of the benefits that Ballyfin AC had
brought to the community.

He paid tribute to the founder Felix Bennett and his team of Vinny Hogan, Mick Daly, Lar Fitzpatrick, Owen Heffernan, Sam Dunne, Jim Quinn, Joe Behan and Charlie O’Rourke who had the foresight to establish the club.

Since 1959 some 3500 people have become a part of the Ballyfin AC story. It was a cold winters night in February 1959 that the club was officially established in the old Band Hall, close to the College entrance.

In was the night Buddy Holly was killed in a plane crash. Some of the original committee and athletes were present at the event, Mick Daly, Vinny Hogan, Mick Kelly, Mick Horan, Mick Goulding, Basil Broomfield, Ken Dunne, brothers Barney and Ger Dunne and Pat Scully.

Unfortunately, a few were unable to attend and had extender their good wishes, most notably Fr Kevin O’Neill and Justin Treacy.

From humble beginnings the club set out to build teams and raise the funds. One of the biggest early adventures was to get Brendan Boyer to perform at the Coliseum Ballroom in Portlaoise in 1960 which raised £300, a huge sum at the time.

In the field events The Broomfield brothers Basil and Arthur together with Oliver Phelan, Kevin O’Neill, Jackie Keyes, Gerry Culleton and Seamus Reynolds were most prominent.

The tradition of Javelin throwing was pronounced in the club with the likes of John Egan, Liam Harney, Harry Southern and John ‘Tonto’ Territt excelling at regional and national level. On the track Lockey Delany, Donal Cotter, Noel and Liam Scully, Liam Duggan, Jack Nolan, Noreen Ryan and the Keenan cousins Dahai, Jimmy and Paul all shone.

Every story has it’s roots somewhere, and Ballyfin AC was more rooted in its people than its place. The club was steeped in family heritage. In Ballyfin you can’t go far from a Fitzpatrick Family and the Dunne’s are everywhere, and almost all of them were part of the club at some stage.

The Heath connection with Ballyfin AC was always striking, going back to the founding of the club by Felix Bennett. Jackie Keyes and Andy Lambe’s family tradition followed on.

Over the years the club moved base a bit and benefited from the generosity of many landowners for training and events. First was the Fitzpatrick in Cappinrush, then George Kerr’s in Ross.

The club moved to an almost permanent base in Broomfield’s at Clonreher in the early 1960’s. However, the club had many ports of call like the Patrician College in Ballyfin where the club hosted the National Senior Cross-Country Championships in 1978.

The club also had access to Scully’s land in Clonreher, the Conroy’s land in Cooltoran and Finlay’s in Clondouglas. The Heath community allowed full access to their commonage as did the Heath Golf club.

The Portlaoise Rugby club also allowed the Ballyfin AC use of its facilities. In Ballyfin the Community Centre, the GAA club and Deadman’s Inn are valued amenities who always open their doors to the athletic club. 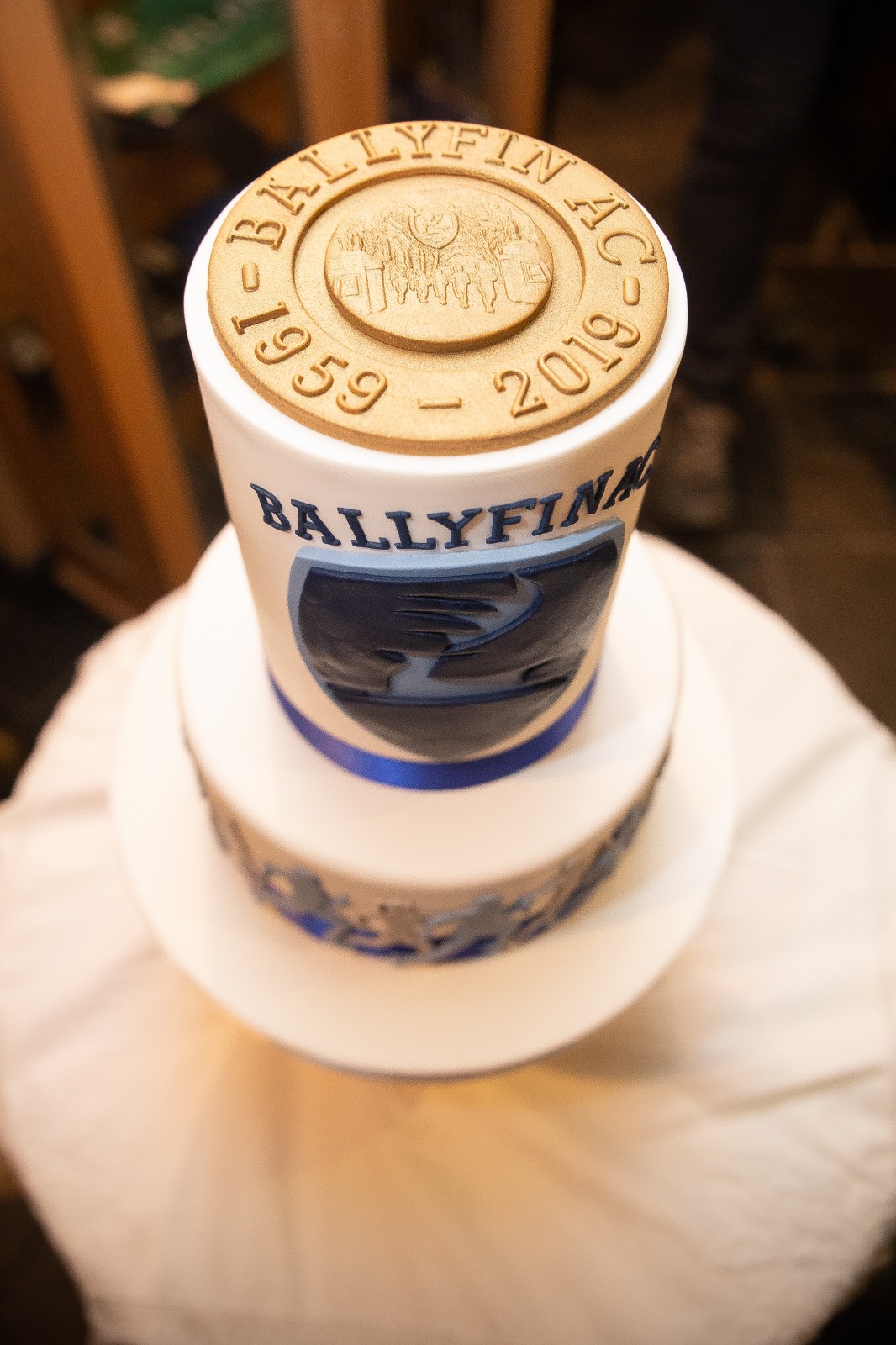 The Female side always had a pronounced influence on the club. The 60th event would not have happened without the drive of Frances Harney, Colette O’Rourke, Breda Davis, Helen Coughlan and Julie Boyle.

When Noreen Ryan (O’Connor) arrived with her cousin Jean Farrell and half of the Ballyfin Camogie team joined in 1968 the club was transformed.

Among that group was Anne Dunne, Eileen Downey, Sadie Dunphy, Breda Lanham and Bridie Gorman. A few more like Marion Booth, Sadie Troy and Breda Kelly from the Heath and Sheila Finn made up the original cross country and track teams.

Over the years the club found many talented athletes, none more so than the legendary Anne Keenan Buckley. She brought huge honour and distinction on the club, beyond our wildest dreams.

Moreover, as lightening has a habit of striking more than once, the club was fortunate to find a group of athletes who gave huge backing to Anne. Josephine Finlay was one of them and together with Anne they both represented Ireland for the first time in 1977.

That team won the National Intermediate Cross-Country championship and a Leinster senior Championship. During the 1970s a few more females made their mark for the club, most notably Doreen Gowing and her sister Patricia, Jean Kennedy, Rose Keegan and Susan Dempsey. Later in the 1980’s and 1990’s the Fennelly sisters Emer and Paula, The Cahill sisters

Caroline and Yvonne, Eileen Fitzpatrick, Geraldine Buggy, Anne McEvoy, Louise Lawlor, the Dunne sisters Mary and Deirdre and the Devoy sisters Noleen and Kay were all part of the success story.

The Legacy of that first female team success carried on for almost thirty years. Anne Keenan Buckley herself won so many big races at home and abroad. She won 21 county senior cross-country titles and her sister Una O’Neill finished second to her seven times.

The club team won twenty team titles, including a run of 13 on the trot. Frances Harney was on most of these teams and others included Caroline Condron, Mary Flynn, Siobhan Culleton, Avril Byrne, Mary Loughman, Patricia Keenan, Mary Dunne and the O’Brien sisters.

What is most striking about those times was the part the parents played in the club, Lilly Keenan, Louise Finlay, Bridie Allen, Magie Scully, Mary Doran and Ann Young and Kay Conroy were all very active in the background.

The club also acknowledged the strong supportive network that had carried the club over many years including the Allen brothers Dan and Harry and the Keenan brothers Paul and Ciaran who were outstanding coaches.

Talk of leading only leads in one direction, to John Scully, Mr athletics in county Laois. The club and county are indebted to John Scully and a succession of great leaders the county was lucky to have over the years.

The Club paid tribute to the families of bereaved past members over the years and paid a special tribute to Johnny Ryan, Jimmy Hunston and Joe Conway who epitomized the great nature and
character of the club.

It’s when a sudden death occurs, like Geraldine Lewis (Buggy) this year that people appreciate the bond beneath the club.

Ironically, late on the night of the event the club was
shocked to hear of the passing of Loughlin (Lockey) Delaney one of the club’s stalwarts in the 1970’s. Lockey was a sprinter and long Jump specialist of renown who won countless county titles and a Leinster championship medal over 100 yards.

The Broomfield brothers were central to everything the club achieved; they were so invested in it. Everything happened in
Broomfield’s, meetings, training and events. The club had the run of their farm and the shed as a meeting place for 35 years which was amazing in retrospect.

That is why the club took the opportunity to pay a special tribute to them. In recognition of that outstanding and valued contribution Anne Keenan Buckley made a presentation to Basil and Arthur on behalf of the club.

The club also made an award to the founding members who were present. This will all form part of a long history of the club that is being recorded for publication.

Photographer Joe Conroy was there on the night and he captured all of the brilliant photographs throughout this piece and below.