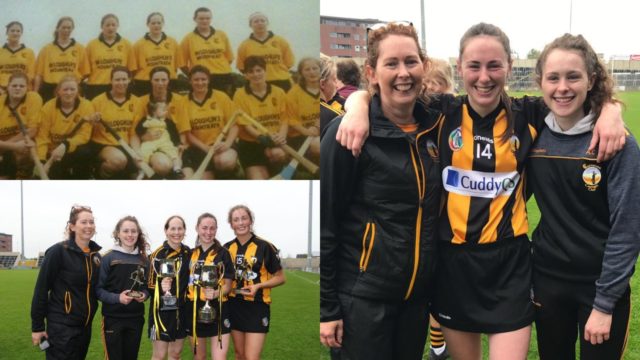 Ahead of this weekend’s Leinster final, we caught up with Camross legend and club chairperson, Tina Cuddy.

You don’t have to be from Camross to heard of Tina because she is a legend in Laois with club medals from U14 to Junior, including Leinster medal under her belt.

She was also manager of the Laois U16 All Ireland camogie champions in 2017. She’s done it all!

Tina has been involved over the years in many way through playing, coaching and also as a parent – her daughters Sara and Aine are following in their mothers footsteps on the field.

My earliest memory would be playing camogie with Killanure NS in the Cumann na mBunscoil. We had the best coach/teacher with Mr. Grincell.

We were the smaller of the two schools in the parish but we had huge success in hurling and camogie.

Camross camogie club was formed in the early 1940s. It wasn’t until 1969 that we contested our first county final. We now have won 25 county camogie titles to date and three club Leinster titles.

We have an ever-increasing membership and have players as young as U6s right through to adult level.

This would be at U14, there was no U12 at the time. We played Slieve Bloom in the county final, they were hot favorites.

I remember it being some battle in Kilcotton that day. We had great battles with Slieve Bloom down through the years, on that occasion we won.

What is your favorite memory while playing with/being involved with Camross?

Feile na nGael has always been my favorite. I played in a few, but in 1995 I was manager of our U14 team when the club won our first Feile na nGael All Ireland down in Limerick.

We have been very successful down through the years at Feile and we won our second All Ireland in 2004. We are so lucky to
still have players involved in both those teams still playing or coaching within our club.

The likes of Niamh Dollard, Lauren Boyhan, Mairead Burke,
Therese Keenan, Mary Moore were involved with both those teams and will be on the pitch this Sunday as players/officials.

As a player, my proudest achievement would have to be winning the Leinster club final in 2000. I played alongside my sisters Yvonne and Therese Keenan.

As a manager, it would have to be winning the U16 All Ireland with Laois camogie in 2017.

As club chairperson, September 21 2019 will go down in the history books for the club, we fielded both an Intermediate and Junior team this year and won both finals. It was a remarkable achievement for our club.

And as a parent, I was most proud to have my daughters Sara and Aine Cuddy line out in both those county finals however, it was a very stressful morning!

We have an amazing committee, who work tirelessly to make sure the girls have everything they need to achieve their potential on the field.

I have made many new friendships with new and existing parents who are continually contributing to the club all for the good off the players. It is very humbling to see people give their time freely.

This year, Fint Scully, Laetita Lyons Delaney, Michael Boyhan, Patrick Burke and secretary Mary Collier have put in trojan work and haven’t got half enough credit for all they have done.

What is the importance camogie/sport for you?

Camogie/Hurling is massively important to me. Growing up it was religion in the Keenan house. We were all reared in the hurling field. Mam and Dad (Teresa and Frank) and all my brothers and sisters play and if we are not playing hurling/camogie we are all coaching and helping the next generation in the club.

Leah Carroll, Ava Hogan, Holly Cuddy, Aoife Daly to name but a few, are all young skilled camogie players that will add massively to our club in the future.

We are so thankful to the GAA club in Camross. We’re always looked after so well but with one field and so many teams within both camogie and GAA, it can get hectic during peak season. So, If I could do something to improve the club, it would have to be to have our own grounds.

Always listen and have respect for your trainers, be committed to your team mates and work hard.