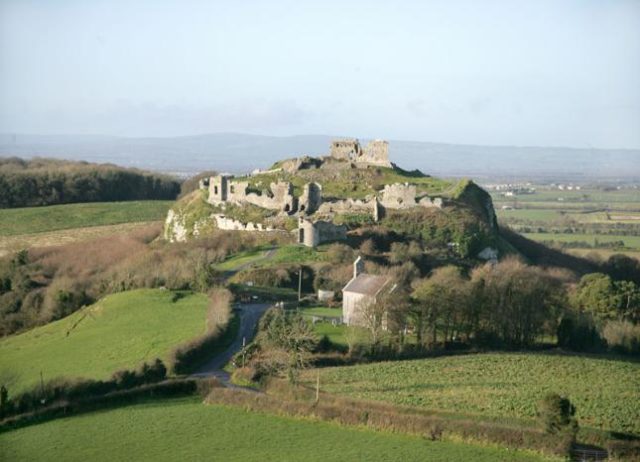 Laois County Council are currently pursing possible locations at the Rock of Dunamaise for car parking facilities and interpretative signage.

Cllr Thomasina Connell welcomed the reply she received to her query from Mr Dom Reddin the local authority’s tourism officer.

Cllr Connell said that it was vital to have proper parking facilities provided at the Rock as it is such an important tourist attraction. Parking arrangements there at present are totally inadequate, particularly for buses.

The National Monuments Service have recommended further geophysical studies of the two shortlisted sites for car park development, to allow full consideration of the suitability of the sites before any purchase is made. Approval has been received to appoint Earthsound Geophysics, and the Tourism Officer is working on obtaining landowners consent for the survey.

In relation to another tourist amenity Cllr Paschal McEvoy wanted the river cleaned in Timahoe village near the Round Tower.

He was informed that the Council had carried out about 400m of river bank clearance there earlier this year. They expect to carry out a further river maintenance work in 2020 in Timahoe subject to the required ecological screening reports being approved.

No funds provided for Rathdowney Cemetery

Cllr John King has appealed to the local authority to carry out repairs to the badly damaged footpaths inside the cemetery in Rathdowney.

And while Cllr James Kelly supported his request stating that the paths are in a very bad state of repair, the reply they receive was not a positive one.

The senior engineer for that section, Mr Rory O Callaghan informed Cllr King that funding for cemetery works at Rathdowney was not provided in the current year’s budget. He agreed that these footpath works in question were identified in an extensive survey of the county’s 27 local authority cemeteries.

This survey was completed in 2018. The Rathdowney works had previously been scheduled in the Cemetery Programme of Works for 2021. A revised schedule will be prepared early next year and Cllr King’s request will be borne in mind.

The question was raised if someone was injured.

Director of Services, Mr Donal Brennan said that all the Council’s property is covered by public liability insurance but that the onus remained on people to take due care.

The issue of works in cemeteries is not peculiar to Rathdowney.

Cllr James Kelly repeated his complaints on the slow rate of progress on the approved and funded works in Ballyfin and Mountrath cemeteries. He said that both cemeteries are down to their last available plot and more space was now urgently required and that the local undertakers are constantly on expressing their concerns.

The Council has made provision in its multi-annual Capital Budget of €250,000 for the setting out of new plots in the county’s burial grounds.

There was good news this week for Rosenallis as progress is being made on the sewerage system in the village.

Cllr Mc Donald had sought an update on the sewage system at Goodwin Estate in the village.

Senior Engineer in the water section, Mr Michael O’ Hora reported that funding was sought and approved by the Department under the Multi-Annual Rural Water Programme. Tender documents are currently being prepared by water services staff.

The project will then be advertised on E-tenders and then an application for a connection to the system will be made to Irish Water.

The councillors, who observed that this had been an ongoing issue, were told that the work is funded by a grant from the Department of €9k per household.