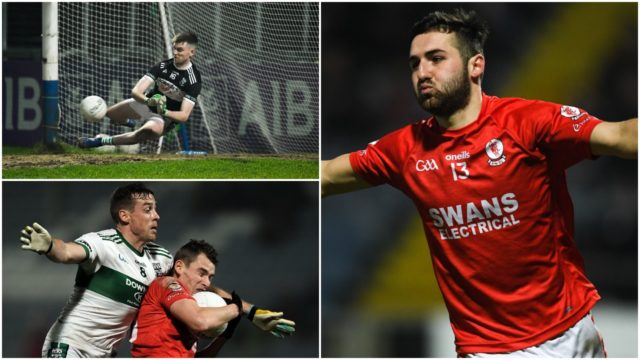 Portlaoise’s bid to reach a first Leinster football final since 2014 has been halted by Carlow champions Eire Og in MW Hire O’Moore Park this evening.

Niall Rigney’s charges, who finished the game with 13 men following the dismissal of Kieran Lillis eight minutes from the end and then Conor Boyle in injury time, were left ruing slow starts to both halves.

A crazy first half of action began in a flash and the pace of the game continued just like that throughout the first half as it swung one way and then the other.

With less than a minute on the clock, an unfortunate slip by Gary Saunders gave space to Chris Blake who cannoned an unstoppable shot off the inside of the post.

From the resulting kick-out, Ross Dunphy kicked the ball back over returning keeper Graham Brody’s head to give Eire Og the perfect start.

Portlaoise struggled to break down Eire Og’s blanket in the opening quarter with a Bruno McCormack point the best they could muster.

Chris Blake took his first half tally to 1-2 as Eire Og went five points clear at the midpoint of the half.

Kieran Lillis picked up a yellow card in the opening quarter and was somewhat lucky not to get a second from Longford referee a couple of minutes after and that was a big turning point in the game.

Bruno McCormack, who had a quiet day in Aughrim two weeks ago, sparkled into life and he set up a point for Benny Carroll after 19 minutes before setting up a goal for the aforementioned Lillis from the resulting kick-out.

David Seale won the ball and found McCormack who in turn picked out Lillis and he cut in on his left from 25 yards to picked out the bottom corner.

Kieran Lillis scored from 40 metres off his left while Conor Boyle also slotted one – but the first half drama wasn’t finished there.

Lillis was once again involved but at the other end as he was adjudged to have shoved Sean Gannon in the area and referee Maguire spread his arms for a penalty.

Cormac Mullins took it but the excellent Brody guessed right and dived to his left to save it and the danger was clear.

Eire Og did get level by half time though as Colm Hulton scored to leave it 1-5 apiece at the break.

Chris Blake began the first half with a goal and he started the second with a point as Eire Og regained their lead straight away.

Portlaoise started the first half slowly and they were doing it again as sub Niall Quinlan and Blake moved Eire Og 1-8 to 1-5 ahead after 38 minutes.

Bruno McCormack finally ended Eire Og’s scoring spree with a free but Niall Quinlan cancelled that out straight away as the Carlow side moved 1-9 to 1-6 ahead with a quarter of the game to play.

Quinlan soon pushed the gap out to four and Portlaoise were then reduced to 14 men with eight minutes to pay when Kieran Lillis was finally sent off for a second yellow after committing his fourth foul since his initial yellow card.

Portlaoise pushed for goals but Eire Og punished them with points and then right on the stroke of full time they broke up field where Ross Dunphy got on the end of a sweeping move to score their second goal.

Conor Boyle was sent off for an off the ball incident and from there, there would be no way back for Portlaoise as Eire Og proceed to face either Garrycastle or Ballyboden-St Enda’s in two weeks time.