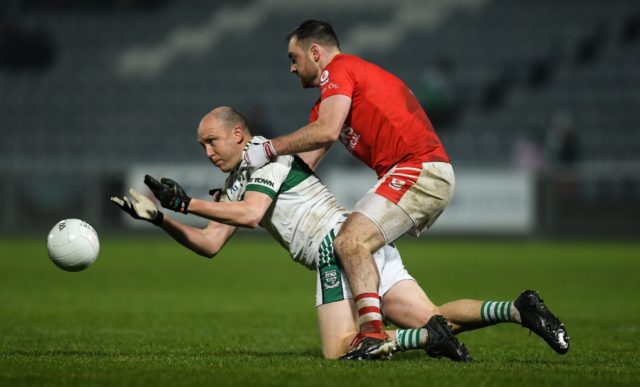 Niall Rigney’s charges, who finished the game with 13 men following the dismissal of Kieran Lillis eight minutes from the end and then Conor Boyle in injury time, were left ruing slow starts to both halves.

Here, we take a more in depth look at how the game panned out.

1 – Man of the match – Bruno McCormack

If Kieran Lillis hadn’t been sent off at the end of the second half, he would have taken this but he committed a number of fouls after picking up his first yellow card and was probably lucky to stay on the field as long as he did.

But for the final 15 minutes of the second half, Bruno McCormack took over and completely controlled the game. He kicked a great point and set up scores from Benny Carroll and Gareth Dillon before playing a crucial role in the Kieran Lillis goal.

Portlaoise could not find a way to keep the 38-year-old in the game in the second half though with his free being their only score.

This has been a problem throughout 2019 and eventually it was going to catch up on Portlaoise at some point.

In the absence of Paul Cahillane, the scoring burden has fallen almost entirely on Bruno McCormack and Kieran Lillis. Ricky Maher, Conor Boyle, Brian Glynn, Benny Carroll and Gareth Dillon have not contributed enough scores on a consistent basis.

They only managed one point in the second half and bar a few speculative efforts, they rarely troubled the Eire Og goals.

3 – The starting return of Brody

Graham Brody took his chance from the bench against St Pat’s two weeks ago and was rewarded by manager Niall Rigney with a starting berth this time.

His runs up the field in the first half caused Eire Og problems and he also pulled off a wonderful save to deny Cormac Mullins from the penalty spot. Went and marked Chris Blake when Portlaoise went down to 14 men but got caught up the field for Eire Og’s second goal.

It is now ten years since Portlaoise contested a Leinster final and the manner of this defeat will certainly hurt them.

Their last appearance was in 2015 and this is the second year in a row that they have been well beaten in a semi final – after Kilmacud Crokes defeated them last year.

Eire Og are the third most decorated club in Leinster history and the Carlow club have the remarkable record of winning every single final they have contested.

Between 1992 and 1998, they appeared in five Leinster finals and won all of them. Their last appearance saw them take Dublin champions Kilmacud Crokes to two replays before beating them on the third occasion.

They will now face either Ballyboden St-Enda’s or Garrycastle in the final in two weeks.

MW Hire O’Moore Park was the venue for tonight’s game and it was the first time with the brand new name.

Matty Walsh’s company and Laois GAA announced their new partnership earlier this week and Laois PRO Pat O’Sullivan had brand new banners and signs to mark the occasion. With the RTE cameras in town too – it was the perfect occasion for Laois GAA in every way except the score.

Portlaoise’s elimination ends Laois interest in provincial competitions for this year but there is still some football to be played in 2019.

The U-20 ‘A’ and ‘B’ football championships still have finals and semi finals to be played while the Laois senior footballer’s will begin life under Mike Quirke in December with two rounds of the 2020 O’Byrne Cup.