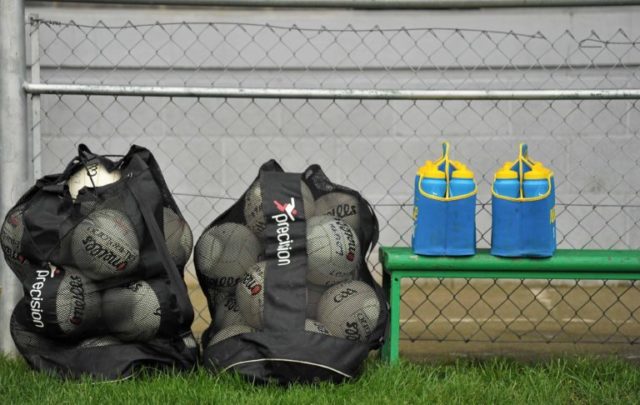 Well, that was dramatic. There were black cards, yellow cards, a red card, a penalty, the odd kerfuffle, the loss of two starting keepers and extra time.

After snowy conditions forced a re-fixture, Courtwood-Emo finally learned their opponents for the championship final.

Portarlington were triumphant in the re-fixture which took place in Stradbally this afternoon where they secured a two point victory over Portlaoise after extra time.

The sides were evenly matched in the first half but Ronan McEvoy was the difference for Portlaoise as Ronan Coffey’s frees were Porarlington’s savior in normal time.

Portlaoise’s Gary Saunders had a strong game in full back after less than a 24 hour turnaround since he played with the senior team last night.

Ronan McEvoy hit the first goal of the game for The Town in the third minute, just minutes before their goalie, Sean Óg Hannify was replaced after a collision.

Portarlington’s first point came off the boot of Curtis Lyons. Daragh Galvin and Ciaran Ward followed up in the 10th and 11th minute with two more scores.

It wasn’t until the 14th minute when McEvoy pointed a free and just a minute later scored a great point from play.

Galvin and Colin Slevin both raised the white flag for Portarlington and the game was all square for the second time after 23 minutes.

McEvoy pointed a beauty before his free pushed Portlaoise two points ahead.

Ben Conroy popped up with a superb goal in the 31st minute but Sean Michael Corcoran brought the gap back to just 4 points at half time.

Portarlington took complete control of the first 5 minutes of the second half scoring 1-4. The impressive pairing of Slevin and Coffey shared the first three points followed up by another Corcoran point.

The side was lifted massively by a 34th minute goal from Lyons a a result of a deflection off the Portlaoise keeper.

And the 36th minute was the beginning of the drama.

Portarlington goalkeeper, Jack Phelan was shown a black card which resulted in Ronan McEvoy converting the penalty for Portlaoise which tied up the game.

Another yellow card was dished out which was to be the second for Portarlington midfielder, Sean Michael Corcoran which saw him walk to the line.

Both teams began extra time with 15 players and the opening two minutes belonged to Portarlington with a point from Jordan Fallon followed by a superb Slevin goal.

Ben Conroy and McEvoy split the posts for The Town who trailed by two points at half time of extra time.

The final 10 minutes only saw two scores – a free for each side courtesy of the two Ronan’s once again. Portlaoise had multiple chances in the dying minutes but Portarlington proved the bigger threat up front.

They now go on to meet Courtwood-Emo in the final.