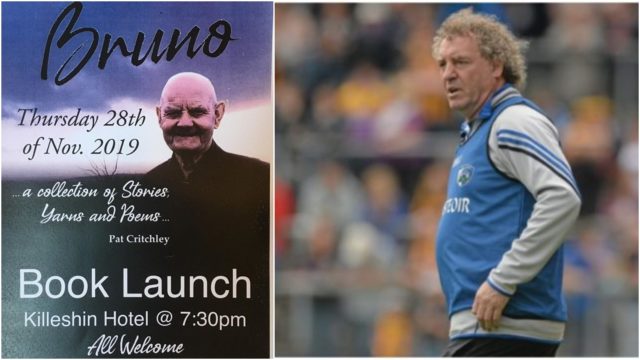 This is an extract from Pat Critchley’s latest book Bruno – a collection of stories, yarns and poems – that is being published this week.

The Giant drank Guinness, large bottles of Guinness. He drank so much Guinness that his rural local had to stock a shelf of large bottles just for the Giant. On occasions, he would head in to town but mostly he drank local.

One night on his arrival, a large bottle was extracted from his shelf and placed with a glass on the bar counter. When settled, he proceeded to tell the lads the story of his night in Benny’s of Abbeyleix, the previous weekend.

“You know me now lads, I drink Guinness. But I was in Benny’s last weekend drinking me large Guinness when they told me there was a Heineken promotion on and they told me if I drank two pints of Heineken I’d get a free pint of Heineken.

“And sur lads, you know me now, I couldn’t go home to the youngsters with just one T Shirt. So I drank five more pints and I got another free T Shirt. And sur after a good while I had me five T Shirts. And then I went back on the Guinness.’

On another night, back in the local, the Crow said the wrong word at the wrong time to the Giant and was at the receiving end of an unmerciful box.

John Wayne would have been proud of the smack which sent the Crow sprawling across the bar. He was unfortunate to land awkwardly so that when he woke up he had a broken arm as well as an awful headache.

A couple of weeks later he explained to my Uncle Tom the intricacies and complications of insurance claims.

“Sur Tom, I couldn’t put down on the form that I broke my arm in a row in the pub. If I did, sur I’d get no money Tom.

“So I put down on the form that I got hit by a bullock. I’m expecting a bit of money to come shortly and we’ll have a few pints on it. And sur Tom, when you think of it, I was hit by a bullock.”

Bruno is being officially launched in the Killeshin Hotel on Thursday, November 28, at 7.30pm. All are welcome to attend.

SEE ALSO – Pat Critchley: The importance of humour, enthusiasm and appreciating what you have