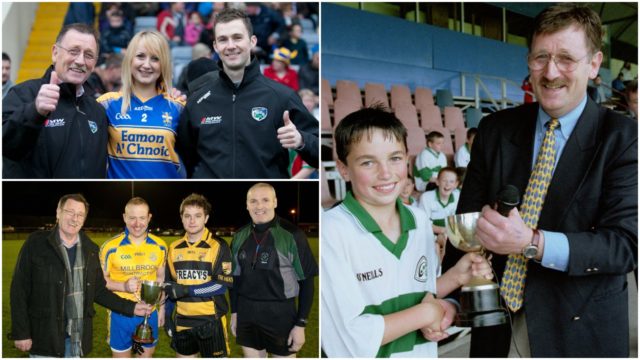 The Heath GAA’s Tom Jones will officially step down from the Laois County Board executive at the County Convention next month.

The retired Garda joined the County Board over 35 years ago and is the longest serving member of the current board.

He joined the board in 1984 and served as assistant secretary, secretary and vice-chair of the juvenile board in the early years.

He was juvenile chairman for a long time where his after match presentation speeches were always memorable and he later served as Development Officer.

Jones, who is originally from Longford, was also chairman of the Laois-Offaly Feile in 2009 and was Event Controller in O’Moore Park for decades.

Tom Jones’ five year term as Leinster Council delegate has now come to an end and he confirmed that he will not be seeking a different position.

Laois GAA Chairman Peter O’Neill said: “I want to say a special thank you to Tom Jones who has given a lifetime of service to our county.

“He represented us with great esteem in every role he held both within the county and at provincial level.

“He certainly won’t be going away and now he can enjoy taking his grandchildren to the matches.”

O’Neill confirmed that Jones is not the only member of the current executive who is stepped away as so too is Pat O’Sullivan.

The Public Relations Officer is stepping away to contest the role with Leinster GAA instead.

Paschal McEvoy’s term as Leinster Council delegate, PJ Kelly’s term as Development Officer and Kieran Leavy’s spell as assistant treasurer are all over too as they have served their five years.

However, it is believe that they may contest separate roles at the Convention on Monday December 9 in the Midlands Park Hotel.