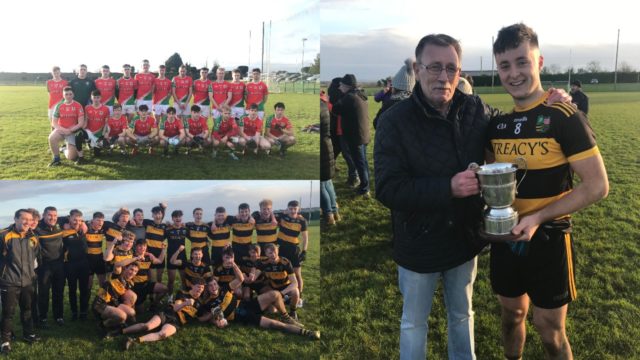 The Heath had a one point win of Clonaslee-St Manmans in Mountmellick this afternoon but the win didn’t come too easily.

It was a an entertaining second half which looked as though the game would be pushed to extra time but The Heath’s Neil Keane came to the rescue.

Although Clonaslee-St Manmans went in as favourites, it was the Heath who were off to a strong start.

Leon Holland, Dylan Kavanagh and Neil Keane split the posts to put their side ahead by three points after 12 minutes.

A minute later it was Clonaslee-St Manman’s first score of the game which came off the boot of Paddy Hyland but it was soon cancelled out by a Conor Booth point.

The trailing side began to find to their feet in the build up to half time and scored three consecutive points thanks to the sharp shooting of Dunne and Hyland.

Hyland was the architect behind the sides last point of the half from Dunne before Conor Booth pushed The Heath’s lead to two points at half time.

The second half was very entertaining and was point for point heading for the final minutes, and has all the potential to see extra time being played.

The Heath increased their lead as a result of a Leon Holland free in the opening minute of the half and hero of the day, Neil Keane claimed his second point.

A Hyland point for Clonaslee preceded two Downey points in a row in the opening 10 minutes.

Conor Booth brought one back for The Heath before a monster free from Clonaslee-St Manman’s centre-back, Jack Owens.

Sean Dunne was next up to raise the white flag and while both sides had multiple chances in the final minutes to take the win, it was seven minutes later when the winning points came from Neil Keane.

The trophy was one of the last outing for Tom Jones, who presented his club with their accolade before will officially step down from the Laois County Board executive at the County Convention next month.