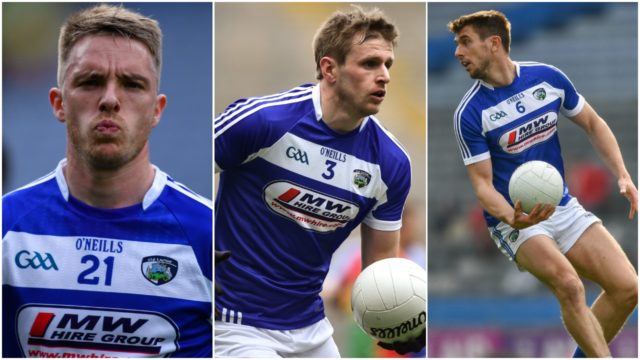 Ross Munnelly, Mark Timmons and Colm Begley will don the Laois jersey for the footballers in 2020 once again.

New Laois manager Mike Quirke confirmed that the trio had returned to the panel for the coming season which will begin tomorrow in the O’Byrne Cup.

Munnelly, who will be 37 later this month, Timmons (33) and Begley (33) have given incredible service to their county.

And with the news the Stephen Attride, Donie Kingston and Paul Kingston will not be part of the panel this year, the fact that these lads have committed is a major boost.

For Arles-Kilcruise forward Munnelly, this will be his 18th season of inter-county football after he made his debut in the Leinster championship winning season in 2003.

Back in March, Munnelly made his 100th league appearance for Laois in a win over Longford and he also played a key role as Laois defeated Offaly in Round 3 of the All-Ireland Qualifiers later in the summer.

Manager Mike Quirke said he is delighted that the trio, and John O’Loughlin, on board as they prepare for another season.

“He felt he had something to offer and after watching him in a couple of sessions, it was clear to me that he has.

“Even outside of the things that he can do on the field – in terms of his leadership, his attitude and his application to doing things the right way – he is brilliant.

“We are doing a lot of stuff inside in the gym before a session and the first two guys there with a ball are him and John O’Loughlin.

“So it is hard if you are a younger guy not to get to training 15 minutes early to make sure you are inside in the gym getting your 500 touches of a ball before we get on the field because two of the oldest guys are doing it.

“So that kind of standard-driving stuff is invaluable as much as anything.”

He said: “Timmons is easing his way into the whole thing and is back out on the field and is great shape.

“Colm Begley is the same so I think they add plenty of experience to the thing with those younger guys as well like Mark Barry and Sean O’Flynn who are chomping at the bit.

“Then you have guys who have never been in before or lads who have and are back again – so that is all bringing a different energy because they want to ensure they are still involved when it all gets more serious at the end of January.”

Laois begin their O’Byrne Cup adventure against Offaly in Portarlington at 2pm on Saturday.