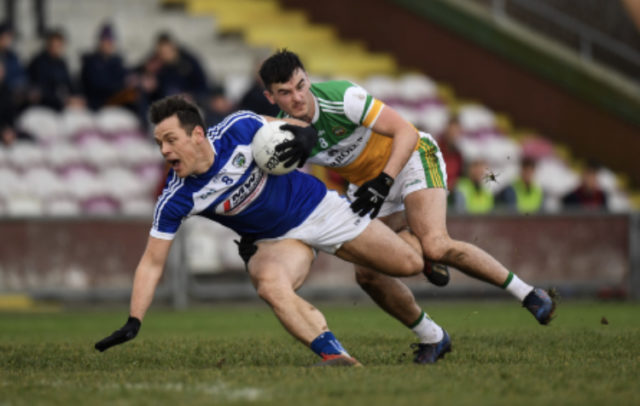 The Mike Quirke era of football in Laois got off to a losing start as the O’Moore men went down by two points to neighbours Offaly in McCann Park Portarlington this afternoon.

Offaly began this game with 11 of the team that started when the sides last met in front of 7,000 in MW Hire O’Moore Park back in July.

That was a Round 3 All-Ireland football Qualifier and Trevor Collins, Paddy O’Sullivan, Robbie Pigott and Colm Murphy were Laois’s only players who started in the Laois win on that night to do the same here.

Manager Quirke gave debuts to eight players over the course of the 70 minutes and Laois competed very well for most of the game in what was a largely positive display.

The first half of this one was actually really entertaining with both sides only kicking two wides each.

Offaly shaded the opening 20 minutes as, after Darragh Connolly and Paddy O’Sullivan had initially given Laois the lead, Jordan Hayes replied before Bernard Allen landed three in a row to move them 0-4 to 0-2 ahead.

Offaly looked to be well on top but then from nowhere Laois scored two goals in a matter of minutes.

The first was created and finished by two debutants when Garry Comerford delightfully clipped the ball in to Diarmuid Whelan who fisted it to the net.

And moments later, Eoin Lowry charged forward and set up St Joseph’s Michael Keogh who shot low off his left boot to score.

Offaly responded with a point from Cian Farrell but Laois went five points clear after 28 minutes through Comerford and a first for Evan O’Carroll.

But Offaly still had a kick in them before half time and they got the next three points via Ruairi McNamee, Anton Sullivan and Allen to reduce the gap.

Paddy O’Sullivan moved Laois three clear with his second point but the teams headed for the dressing rooms level when Jordan Hayes set up Cian Farrell who shot low into the corner of Niall Corbett’s net.

2-5 to 1-8 at half time but Laois regained the impetus on the resumption through two Evan O’Carroll frees.

Both sides made a plethora of changes as the half went on and that broke the pattern of the game with both teams guilty of kicking wides or losing possession in dangerous areas.

O’Carroll landed another free while Mark Barry curled over one with almost his first touch to give Laois a 2-9 to 1-11 lead with 15 minutes to go.

But Offaly would get the next four points through Johnston, Allen (2) and Niall Darby to give them a lead they would never relinquish.

Laois lost Evan O’Carroll to a black card after 62 minutes which resulted in a ten minute sin bin and meant Laois would play almost all of the remainder with 14 men.

But Laois continued to make a fist of it and two right footed points from veteran Ross Munnelly had the gap down to one again – 2-11 to 1-15 – after 67 minutes.

But Offaly would not give in as Johnston and Allen points saw them home despite a late score for another Laois debutant – David Aston.

Laois will continue their O’Byrne Cup campaign away next weekend to Wexford.