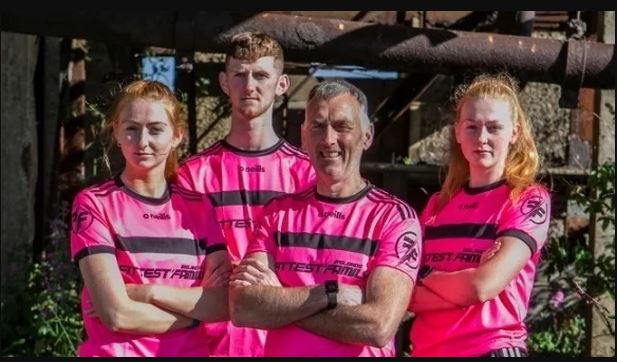 Holy God that was unreal!

Nicholas, Fionn, Cara and Meave will now hope to go one better than the McDonalds from Ballyroan last year who just lost out in the final.

The Mahers were up against the Murphys from Wexford and the McSharry’s from Sligo in tonight’s semi final with two places in the final up for grabs.

Up first was Cargo Chaos where one female member of each family had to wheel a giant tyre through an obstacle course in order to free the other three members from a hold.

Cara Maher was up for that and she successfully freed Fionn, Nicholas and Maeve who then had to transport 25 sandbags across a plank, over a wall and up two containers.

The McSharry’s ran away with the race and finished first while the Mahers and Murphys were locked in a tense battle for second.

But the Laois family just edged them out to finish in second and claim two points.

Up next was Hanging Tough where the Mahers knew that if they got a better time than the McSharrys, they would be straight through to the final.

The McSharrys hung on for 9 minutes and 52 seconds – the longest combined time in the series – and the Mahers time of 6 minutes and 38 seconds wasn’t enough meaning that they headed for the eliminator against the Murphys for the second round in a row.

First, Fionn had to pull a jeep for 150 metres and then swing across monkey bars to release the remaining three members where the race really begins.

Multiple containers, cargo crawls, walls and a big ramp lay before the families and whoever got all four members to the top of the ramp first would be the winners.

The race was neck and neck throughout with the Mahers taking an early lead over the containers.

But the Murphys came right back and it went down to the ramp where the Mahers just got Maeve up on the ramp in time to win.

In Round 1 six weeks ago, the families were split into three heats of five with the first three qualifying for the next round and the bottom two heading for the eliminator.

Then in Round 2, they took on ‘Quick Sand’ against coach Anna Geary’s two other families – the McArdles from Down and the Ui Bhraonains from Carlow.

The challenge saw the families climb the 20 metre sand dune in Strandhill, Co Sligo while also carrying two large life buoys behind them.

The quarter final was a grueling experience for the Mahers too.

They were on the Hell & Back course where the bottom two families after two events would end up in a eliminator.

And after the Swamp Trek and Devil’s Creek, the Maher’s ended up in the eliminator against the Mandiangus from Dublin.

This was a race which began on bales of hay and then consisted of a 360 metre run, ice baths, a series of walls, cargo net and then back up the hay bales where they started.

But the Mandiangus got stuck on one of the early walls and the Mahers streaked ahead and won comfortably to book their place in the tonight’s semi final.

Roll on the final!!