Mens sana in corpore sano is the old Latin saying but its basic message is a simple truth that has stood the test of time.

It is one aspect of the success story that is the Portlaoise Street Soccer League which is aimed at those who might not normally have participated in mainstream sports or team sports activities.

It is pioneered by the team at the Laois Sports Partnership and while participating, playing and even winning are important the street leagues have other goals too and are not just about putting the ball in the back of the net.

Some of those associated with the Portlaoise Street Leagues were recently hosted and feted at County Hall where there endeavours were recognised with the presentation of Certificates of Achievement in Sport.

Caroline Myers who heads up organising the street leagues for the Laois Sports Partnership was joined in the Council Chamber by Ethan O’ Reilly and Shane Lambe, who had so excelled in the local leagues that they were also selected to go forward and represent Ireland in the league’s international series.

The Portlaoise lads and the boys in green got a tough draw in the group stages coming up against top sides Mexico and Chile, two teams who would ultimately go on to contest the main final, with Mexico taking the title.

Despite not qualifying from the second stage group for the main cup, Ireland entered the Glyndwr Cup and hammered Norway 8-0 in the quarter finals, Indonesia 8-3 in the semis, before winning the cup final against Hungary – effectively finishing 17th out of 44 teams in the competition with Eathan also winning a fair play award along the way.

That’s fair play and a fair result all round for the Portlaoise duo and their experience is reflected in the overall merits of the street leagues.

Cllr James Kelly, who himself is so strongly associated with soccer such as the Combined Counties and Town’s Cup commended Ethan and Shane for their outstanding achievements  and the manner in which they had represented their country on the international squad.

“You have done Portlaoise and Laois proud on the world stage,” Council Chairman, Willie Aird agreed.

The street leagues are played at the Portlaoise Leisure Centre all-weather pitches and also served to highlight the success and constant use of that valuable facility. It is intended that the leagues will continue to be run in 2020. 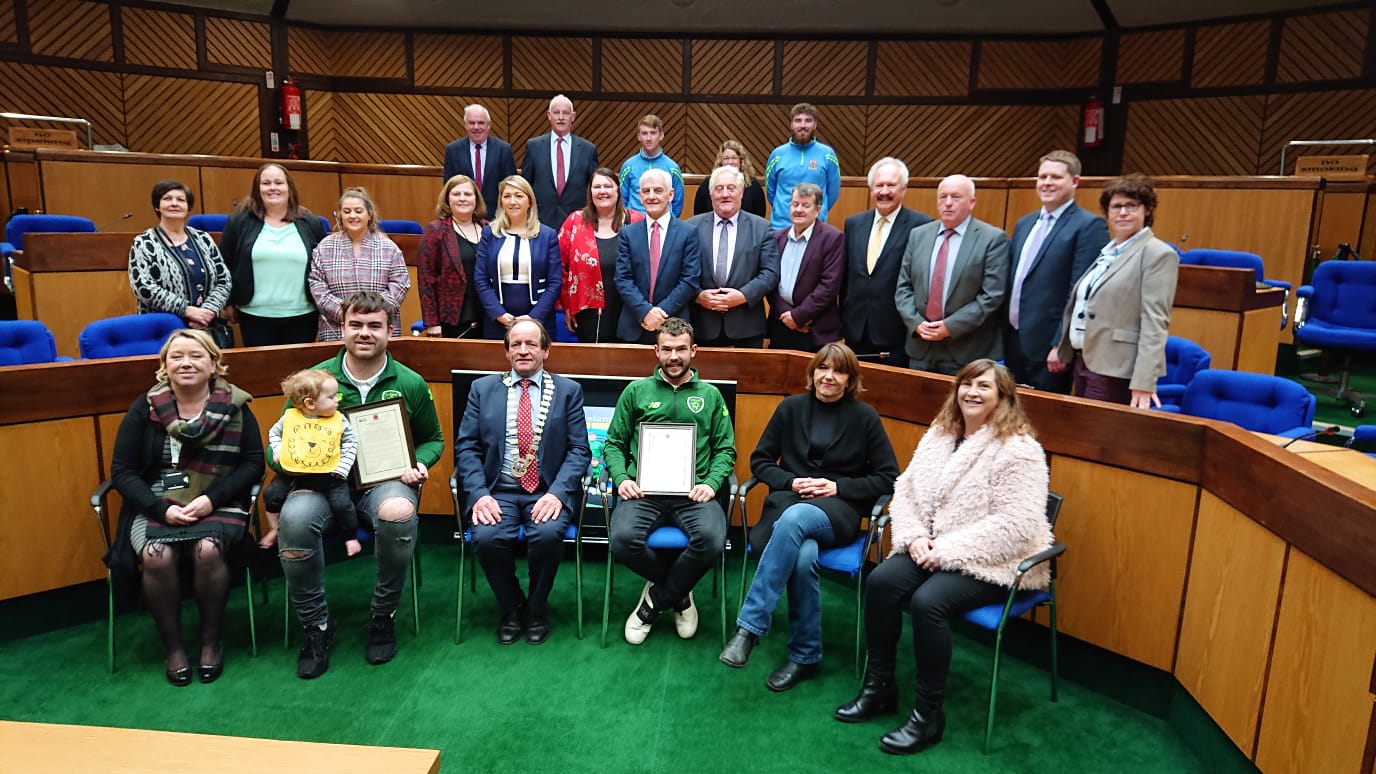 Ethan O’ Reilly was enthusiastic in his praise of the street leagues and the important role they have played in his life.

“As a teenager I always seemed to be angry but the soccer and the street leagues gave me a great outlet as I love sports and these tournaments brought with them a brotherhood and camaraderie in Cardiff and the unbelievable experience for me and Shane and all the lads and it’s been incredible to take part in the world cup and even to bring home a trophy. It has meant so much to us.”

These Irish Street Leagues were established as an independent non-profit entity in 2004.  Its origins go back to 2003, when Sean Kavanagh Manager of Ireland’s Big Issue Magazine brought a team of homeless lads to the inaugural Homeless World Cup in Austria.  Seeing first-hand the benefits that could be accrued from participation in sport, both social and physical, he decided that rather than build lads up for a once-a-year tournament, having something that they could participate in all year round would be of greater benefit.

Together with Dublin City Council a pilot project was set up in 2004 in the inner city.

This proved very successful and as a result in 2005 the league was expanded to cover the greater Dublin area, also that year the League became affiliated to the Football Association of Ireland in their ‘Football-for-All’ category.

Various tournaments are held throughout the year culminating with All Ireland Tournament that brings teams from both North and South to participate in a one-day event with over 300 players taking part.  From this tournament a panel of players are selected from which the team to represent Ireland in the Homeless World Cup is chosen.

“Irish Homeless Street leagues uses the power of sport to transform the lives of individuals from underprivileged, poorly educated, socially excluded and conflicting communities. We look to engage both male and female players, usually between the ages of 16 and 40 years, who are traditionally excluded from mainstream activities,” outlines Caroline Myers of The Laois Sports Partnership.

Their motto is: Irish Street leagues are not about fixing people’s problems. It is part of the solution.