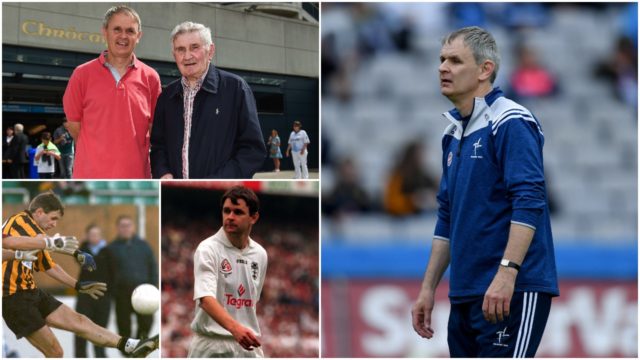 Back October, Killeshin contested their first ever Laois senior football final where they lost out to Portlaoise.

A couple of weeks later, they lost their manager Maurice Browne who joined Mike Quirke in the Laois Senior Football team.

But Killeshin didn’t wait long to replace him:

Kerry native Karl O’Dwyer will be the man on the sideline for the defeated senior football finalists in 2019.

Karl, son of legendary former Laois manager Micko, has been in Laois before as he formerly managed Arles-Kilcruise in 2016.

He also captained his club to a Kerry intermediate football title in 1993 and also won two county U-21 titles with South Kerry.

Karl subsequently transferred to Rathangan in Kildare which made him eligible to play for their county team – managed by his dad Micko at the time.

In 1998, he helped Kildare to their first Leinster Senior Football Championship title since 1956, he later helped his team to a first All Ireland final since 1928 but lost out to Galway on the day.

In the semi final Kildare beat O’Dwyers native Kerry. At the end of the year he picked up an All Star Award at Full Forward. In 2000 he once again helped Kildare to a Leinster title.

O’Dwyer retired from inter-county in 2002 following Kildare’s defeat to Kerry in the All-Ireland Qualifiers.

He then transferred to Round Towers where he won a Kildare championship in 2003 before going into management.

O’Dwyer managed St Mary’s in Wicklow to a senior championship title in 2011 and took Old leighlin to three consecutive county finals in Carlow from 2013to 2015, winning in 2013.

He managed his school, Confey college, to a Dublin and Leinster title in 2006 and a Dublin title in 2015.

He has also managed St Laurences in Kildare to minor and U21 finals in 2014 and 2016 respectively.

This year, he was part of the Kildare senior management team under Cian O’Neill.

Confirming the news to LaoisToday, Killeshin chairman Gavin Deering said the club were delighted to appoint the former All-Star winner.

He said: “We are delighted to have Karl O’Dwyer at the club, he has a wealth of experience as both a player and as a manager at both club and inter county level.

“We are hoping that he can bring that vast knowledge to the fantastic group of young players we have in the club.”

Deering also had some nice words for departing manager Maurice Browne – who led the club to their first ever county final appearance last month.

He said: “We would like to thank Maurice Brown for the two years he was with the club, he is an absolute gentleman and we wish him all the best in his new role with Laois Seniors.

“There is no doubt that Laois football is in good hands with Maurice involved.”