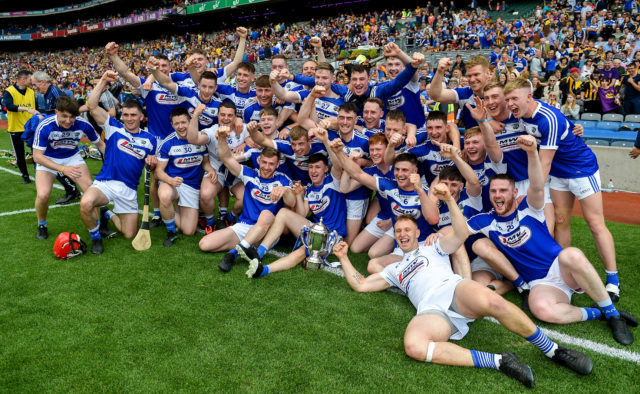 Here’s hoping this won’t be an issue next year.

The GAA’s decision not to have a ‘Champion 15’ selection for the Joe McDonagh Cup this year has been met with anger in Laois today.

Last year, in the first year of the competition, the GAA announced a Champion 15 that had six players from winners Carlow, five from runners up Westmeath and one each from Laois (Ross King), Meath, Antrim and Kerry.

So, in line with that thinking, Laois would have been entitled to six players this year but instead they won’t have any.

Yesterday, the GAA released the Champion 15 selections for the Christy Ring, Nicky Rackard and Lory Meahger and at the bottom of their press release, they confirmed they would not be doing the same for the Joe McDonagh Cup.

They said: “Players competing in the Joe McDonagh Cup were considered in the PwC All-Stars for the Liam MacCarthy.”

Laois do have two All-Star nominations in the form of Enda Rowland and Jack Kelly but had they not defeated Dublin in the All-Ireland Qualifiers, it would have been very interesting to see if Laois would have had any at all.

A GAA spokesperson confirmed the decision to LaoisToday this morning that they would not have a Joe McDonagh Champion 15 and Laois Hurling Board chairman Tom Clear has reacted angrily to the news.

He said: “This is an absolute disgrace and I am seriously disappointed with this decision.

“The Laois hurlers gave us some brilliant days this year and while we are delighted Enda (Rowland) and Jack (Kelly) got nominated for All-Stars and Paddy Purcell for Joe McDonagh Player of the Year – to have these awards just dropped without any notice is not fair on the rest of the players.

“This is the second tier competition of hurling and yet it has been kicked aside while the Christy Ring, Nicky Rackard and Lory Meagher players, who play in tier 3, 4 and 5, are getting more recognition.

“While it is bad for us, it is even worse for the rest of the counties. Players from Westmeath, Kerry, Antrim and Offaly, who all played their roles in this championship, will not get any recognition at all.

“Special Congress voted for Tier 2 football at the weekend and I wonder now is this the type of disrespect that faces those counties too?”

The Joe McDonagh Player of the Year award will be presented on the same night as the All Stars on Friday, November 1.