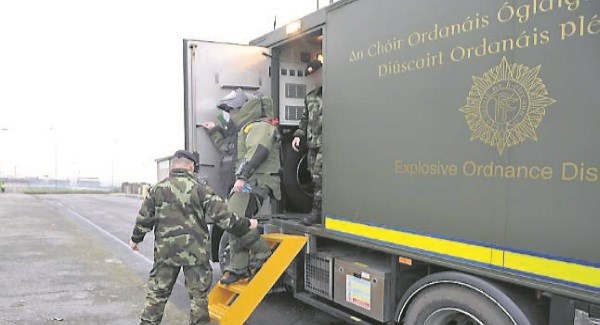 Not just your average day in Coláiste Íosagáin.

The Army Explosives team were in a local secondary school this evening to carry out a controlled explosion.

Members of the Army Explosive Ordnance Disposal Unit were called to Colaiste Iosagain in Portarlington along with members of the Gardaí to remove old chemicals.

A loud bang was heard coming from the school at around 8pm with a number of army and garda personnel on site at the time.

However, while a Garda spokesperson confirmed that the area had to be closed off as per protocol, there was nothing untoward.

“The army EOD team had been organised to facilitate the removal of some on site chemicals in the school this evening,” said the spokesperson.

“(It was) more than likely part of the science department. No bomb scare or offence in it.”

All secondary schools are now on summer holidays – though Leaving and Junior Cert exams are underway.

Students sat exams on Wednesday, Thursday and Friday and will return again on Monday.