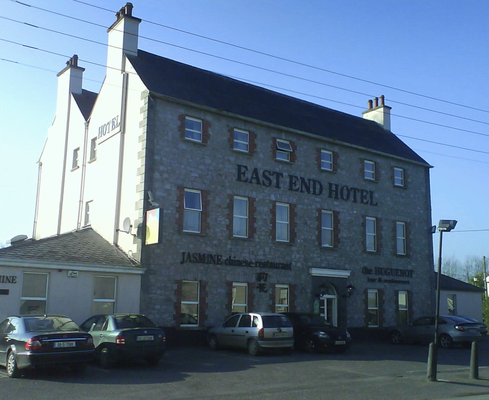 According to a local councillor, the status of new occupants at a Portarlington hotel was questioned by local people in June.

The status of new occupants at a Portarlington hotel has been questioned by local people, according to a local councillor.

Councillor Aidan Mullins has stated that people in Portarlington have contacted him to enquire about the status of the new occupants in the East End hotel in Portarlington.

Councillor Mullins said that a number of young men, believed to be from Africa and Eastern Europe, ‘have moved into the hotel where they are being accommodated and provided with three meals a day’.

Councillor Mullins stated that he does support the Refugee Resettlement Programme, but that it has not expressly stated that the accomodation is for asylum seekers or direct provision, and that the Department of Justice, ‘owes it to the people of Portarlington to explain what is happening in the East End Hotel’.

In May, a contract worth €11.5 million was advertised seeking accommodation for persons seeking international protection in four counties in the Midlands, including Laois.

While the contract states that it is for persons seeking international protection, cllr Mullins says it does not directly mention asylum seekers or direct provision.

He believed to be less than 20 occupants at the hotel at present, but Cllr Mullins understands from information he has gathered that over 30 people may be accommodated in total in the near future.

“I think that the people of the town are entitled to know what is happening in this regard on their doorsteps in the East End Hotel and should have been made aware of these plans in advance.

“We are also entitled to know what the term “persons seeking international protection” means as opposed to asylum seekers or direct provision and if there is a difference,” said the Portarlington cllr.

He states that the contacted the Department of Justice for clarification but has received no reply as of yet.

When contacted, a spokesperson for the East End Hotel said they could not comment on the status of the residents due to General Data Protection Regulation (GDPR).