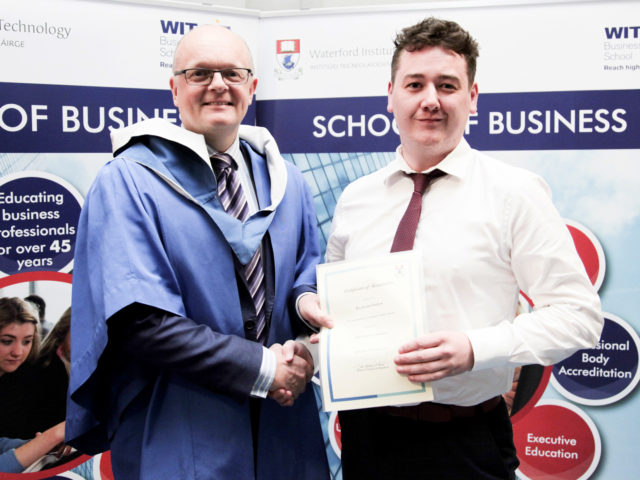 A Laois student was one of those presented with certificates at the Waterford Institute of Technology (WIT) School of Business Annual Recognition of Awards Ceremony last semester.

The Dean’s list comprises approximately the top 5% highest performers in the School each achieving first class honours in their continuing studies.

One of these was Raymond Dalton, who is studying the Bachelor of Business, a past pupil of Heywood CS.

This Ceremony recognises continuing students with outstanding academic achievement in their previous year.

Recognition of student effort and excellence is something the School of Business continually does.

These top performing students can influence others to achieve their potential as peer role models, and the recognition represents a mark of excellence to be included in recipient’s curriculum vitae.

The awards were called by the course leaders and presented by the Head of School (Dean) of Business, Dr Thomas O’Toole.

In a speech he said: “The students on the Dean’s list are among the highest achievers nationally and internationally.

“Their quest for academic excellence is underpinned by their commitment and enthusiasm for their programme of study and bodes well for their future careers.”