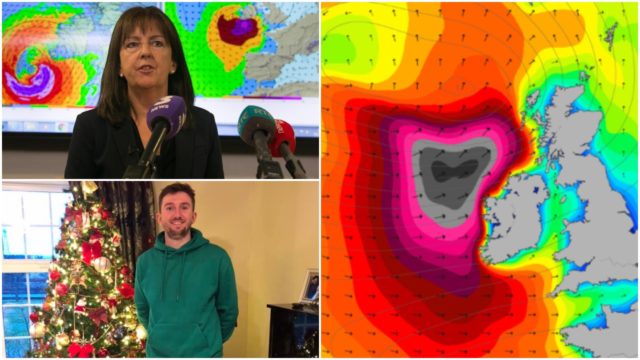 A local weather forecaster has launched a blistering attack on Met Eireann over claims that he, and other forecasters like him, are putting out fake weather reports.

She said: “I just want to say, could I ask people to stop tweeting fake weather warnings and fake weather charts.

“There’s some really crazy stuff out there and it’s very irresponsible. There’s a whole of fake weather charts with red warnings on them and everything.

“The Met Eireann warnings are out, we spent the last two days considering this very carefully. We’ve a full team of people here with the best high resolution model.

“Maybe some people think they are better at forecasting (the weather) by looking out their window than the full team at Met Eireann. We run a 24/7 operation paid for by the citizens of Ireland.”

But Mr Nolan has taken grave exception to these comments and has released a statement in response.

He said: “Once again it has been brought to my attention that certain senior staff within Met Eireann have taken offence to the issuing of weather forecasts and associated warnings by Ireland’s Weather Channel, branding them as ‘amateurish’, ‘fake’ or ‘irresponsible’.

“I take each of these claims to be gravely mistaken as all the weather forecasts and warnings provided by this service are done so through the consultation of numerous sophisticated weather models, years of dedicated experience in forecasting such conditions, and at all times are presented in a manner which seeks to reduce the overall risks to the general public in a timely and appropriate manner.

“Ireland’s Weather Channel was created due to public demand for an alternative meteorological forecasting service, which would provide weather forecasts and warnings with the very highest levels of accuracy and professionalism, as well as being communicated in an easily understood and timely manner.

“Ireland remains one of the only countries in Europe with just one meteorological forecasting service, which I personally feel lowers the overall standards of forecasting due to a lack of competition from the private sector.

“In terms of the usage of amateurish as a jibe in the direction of myself I find such accusations to be utterly unfounded, and before assuming such accusations I would kindly ask those making such remarks to examine my academic record.

“Currently I am the holder of a BA in Geography and History from UCD, an MSc degree in Climate Change Science and Impacts from UCD, as well as an MA in Politics also from UCD. At present I am a PhD Scholarship student working in University College Cork on a project which examines the impacts of climate change on the overall production of fodder on the island of Ireland and how climate change will impact the growth of fodder in the near to medium term future.

“With this in mind I would ultimately conclude that the term amateurish is a wholly inappropriate remark to describe a colleague whom has attained a significant grounding in meteorological and climatic sciences from some of the highest academic institutions in this country.

“Regarding Storm Brendan I believe that overall Met Eireann’s forecasts and warnings were accurate to a certain degree, however I would argue that coastal districts of the south and south west, as well as coastal districts in Connacht and Northwest Ulster should have been issued with a red level weather warning. Wind gusts of over 135 km/h were recorded along the south coast of Cork yesterday, a level which exceeds the 130 km/h mark which is required for a status red weather warning to be issued, while the physical impacts in certain counties such as Cork, Kerry, Mayo and Donegal were on an order which would have justified the issuing of a higher category of warning than that which was given.

“The exact reasons behind the failure to issue a status red weather warning can only be speculated upon, however it does appear that a certain level of conservatism exists within the current weather warning system, a system which I believe requires a review so as to establish best practices for future severe weather events.

“The county by county system of issuing yellow, orange and red weather warnings is simply inadequate as meteorological conditions can change drastically in this country over a very short geographical space. For example yesterday saw win speeds of 135 km/h on the south Cork coast, surpassing the limits required for the issuing of red weather warnings, while parts of north Cork merely saw winds of around 90-100 km/h.

“Therefore within one county one could argue that all three scales of colour coded warnings were justified, yet under the current system only one color is allowed.

“My argument would therefore centre around the need to create a much more site specific weather warning system, one which breaks the county’s down on a community by community basis, or voting district scale.

“Once established the system would allow for certain coastal fringes such as south Cork, or west Galway to receive the correct level of weather warning, while at the same time ensuring that centres of economic production such as Cork City or Galway City could function as normal.

“In essence such a system eliminates the risk posed to members of the public by only issuing orange level weather warnings when red weather warnings are required, and at the same time ensures economic production remains unaffected in our more populous areas.

“The expected savings on an annual basis would reach into the tens of millions at a minimum, and at best would save the state hundreds of millions in lost revenues.

“The second element of any new weather warning system is to move away from the concept of just issuing weather warnings based on passing certain numerical criteria.

“For example, in order for a red weather warning to be considered in Offaly wind gusts must exceed 130 km/h, an event which rarely occurs, yet the impacts from a wind gust of 120 km/h in Offaly can have much greater impacts regarding public safety than a wind gust of 130 km/h in coastal fringes where the infrastructure and general environment is more used to such weather extremes.

“I would propose moving towards a system which is based on physical impacts rather than one which is exclusively based upon the surpassing of certain meteorological thresholds. Ultimately public safety is of paramount importance and is regarded as the number one responsibility of all meteorological weather organisations.

“The current weather warning system does need ensure the highest standards of public health and safety are maintained due in part to the restricted issuing of red weather warnings on account of the economic losses which would be entailed and due to the warnings being issued exclusively in a manner which requires certain thresholds to be crossed simply on a national scale and not on a system which takes into account the potential impacts in regional locations across the country.

“I sincerely hope that this concludes the current debate between certain officials in Met Eireann and Ireland’s Weather Channel, and that we can all focus upon the real job in hand which is forecasting accurate and timely weather warnings for the people of Ireland, thereby ensuring public safety is maintained.”