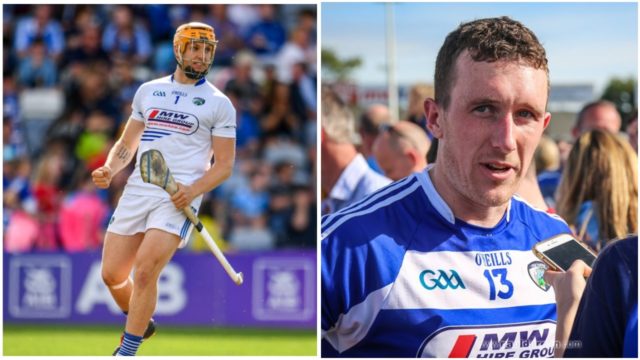 Laois senior hurling manager Eddie Brennan has named the captain and vice-captain for the coming year.

Abbeyleix’s Enda Rowland will be captain and he will be assisted by Clough-Ballacolla’s Willie Dunphy.

Keeper Rowland received an All-Star nomination in 2019 following a string of incredible performances and he takes over from Rathdowney-Errill’s Paddy Purcell.

While Clough-Ballacolla’s Dunphy fills the role left vacant following the departure of Joe Phelan from the panel.

The Laois senior hurlers enjoyed a brilliant year in 2019.

After a decent Division 1B league campaign that saw them reach a quarter final where they lost out to Limerick, the championship was even better.

They won all of the round robin games in the Joe McDonagh Cup which saw them qualify for the final against Westmeath.

Here, they defeated the Lake County in Croke Park and then one week later they stunned the GAA world by defeating Dublin.

In dramatic scenes in O’Moore Park, Laois won 1-22 to 0-23 to reach their first All-Ireland quarter final in 40 years.

It was back to Croke Park then a week later but Tipperary proved a bridge too far as Laois went out to the eventual All-Ireland champions.

Laois begin their 2020 campaign in Division 1 at home to Wexford on Saturday January 25 at 7pm in MW Hire O’Moore Park.